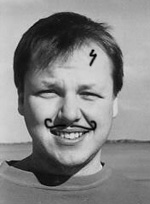 Modest Mouse are a demi-godly indie rock band from Issaquah, Washington who have gained both commercial and critical success with albums such as Bad News For People Who Love Good News, The Ship Sank Before We Were Even Dead and The Fuscia Album. Led by a slightly fat man known only as Isaac Brock (or Ithaac Brock), the group was formed in 1995 after a severe dramamine high in which Mr. Isaac persuaded childhood friends Eric Judy and Jeremiah Green to join his band. As they could not play any instruments, they agreed to perform as background dancers for $5.60 per show.

It is known that before the band landed a record deal they busked in the streets of Washingturd singing melancholic songs about religion, death and science. Isaac would stand on the corner near some suspiciously dressed girls and sing in tune with his guitar while Jeremiah and Eric would perform a slow dance behind him. One night, a fat man with a beard who had hired a girl on the corner noticed the band's performance, and immediately offered them a record contract. The band thought about it for a bit, and then said "no" because on closer inspection, the fat man with a beard didn't even have a record label. Several hours later another man who did have a record label happened to hire the same girl on the corner and she pointed him in the general direction of Modest Mouse. He then offered the band a contract, and the band accepted.

With their recording contract they were able to record several okay-sounding EPs, including Blue Cadet-3, Do You Connect?, Going Down The Road and The Fruit That Fucked Itself. These okay-sounding EPs soon gathered a cult following in the indie scene and the band made a few sales, a large majority being because their CDs were rewritable. This pushed them to record a full album titled Oh My God., which didn't sell much but that was okay, because their next album The Lonethome Crowded Weth was a major breakthrough for the band lyrically and for researchers of ear trauma. Tracks like the testosterone-filled Teeth Like God's Doc Martens and the aggressive Trucker's Lunch with its 20 minute instrumental officially put Modest Mouse on the map, and major record labels were knocking at his door. They threw stones at his window at night, tried to kidnap his dog and even stole Jeremiah Green in an attempt to get Isaac to sign. Finally Isaac signed with Epic after they held his techie Nicole Johnson at ransom, and he couldn't live without her and her Photoshop skills. With their new corporate monster label Epic, the band released The Moon and his Polar Bear and the 80's pop-flavored albums Good Newth For People Who Love Bad Newth and Mr. Ronky Konk and His Journey into Asia, which arrogant indie snobs across South America would purchase and then burn.

On July 27 1999 Isaac was arrested for lewd behaviour in public toilets while on tour in Switzerland. He was sentenced to 5 months in prison, meaning the band had to go on a sort of mini-hiatus. Jeremiah and Eric totally freaked out. Jeremiah actually started pulling out his hair, while Eric attempted to grow a beard. Jeremiah proceeded to move back in with his mother and got a job at a local coal mine to fill his time. Eric established a secret relationship with Wayne Coyne, which we are not going into.

The band gained much commercial success with their later albums, and this finally allowed the members to earn some decent money. Isaac became a millionaire and bought the band a huge pimped-up trailer, which is painted green and pink. This vehicle accommodates the band and Nicole while they tour around Europe, and they claim it is much better than staying at the Hilton. "There is even a mini-pool in that trailer," an excited Eric once proclaimed, and he was promptly slapped.

The band's financial success also meant that Isaac could finally afford to track down his mother, who he had lost during a freak boating accident on a summer's day. He had always thought his mother had died, but she had in fact swam her way to safety and changed her name to Alana A. Piggywhistle and lived a life in solitude in the UK. Isaac found her, and she was so happy to see him that she bought him a crown. Which he now wears daily.

On September 5 2006 the band issued an official press release announcing that "Johnny Marr just joined our band. Suck shit Morrissey! We like Robert Smith more than we like you." Isaac then started giggling uncontrollably.

The group's first single from We Were Dead Before the Shit Even Stank, Glovebox, was released in early January 2007. It made all the indie snobs cry and then prompted them to restart old arguments about the band selling out. You can view footage of these kids fighting each other with forks here.

Their one and only album was released in 2010: 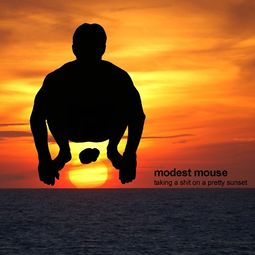 "Taking a Shit on a Pretty Sunset" by Modest Mouse
Retrieved from "http://en.uncyclopedia.co/w/index.php?title=Modest_Mouse&oldid=5941967"
Categories: