From Uncyclopedia, the content-free encyclopedia
(Redirected from Microscope)
Jump to navigation Jump to search

Reputedly, an electron microscope teensy tiny, itsy bitsy electrically charged particles to draw pictures of invisible doodads. Although this instrument is considered fictitious by sophisticated men and women, naive adults and children tend to believe that it actually exists and can "see" 2,000,000 times better than a light microscope.

The late Jack ("King") Kirby, a Marvel Comics artist who was known for his ability to draw realistic looking but entirely fictitious instruments of imaginary science, or science fiction, is believed to have designed and drawn the first electron microscope. It is thought that a three-dimensional Styrofoam sculpture of the imaginary instrument was then created based on Kirby's sketch. It is believed that all pictures that are alleged to be of the electron microscope are really nothing more than a

Since this is a scientific article in a world-renowned encyclopedia, it would normally explain how the instrument works, so here you go. This so called "electron microscope" uses electricity to go to the internet and get images of something to show you that is supposedly microscopic(hence "electron"). The microscope part is something the inventor added to fool people into thinking it was an actual microscope instead of a super-fast web surfer. If you believe this B.S., I must say you ARE an idiot. Please trust the uncyclopedia. The electron microscope in fact was invented by a sculptor who meant to design something different and kinkier. His invention ended up being more useful,however, and he lived happily ever after...

The electron microscope, it is believed, is really a propagandistic tool of the scientific community which enables them to:

For those without comedic tastes, the self-proclaimed experts at Wikipedia have an article about Electron Microscope.

The morons at Wikipedia have pointed out a few of the instrument's drawbacks. Since the wording sounds technical, it is included here, even if, in reality, it is only balderdash, claptrap, and baloney:

Electron microscopes are expensive to buy and maintain. As they are sensitive to vibration and external magnetic fields, suitable facilities are required to house microscopes aimed at achieving high resolutions. The samples have to be viewed in vacuum, as the molecules that make up air would scatter the electrons. Samples have to be prepared in many ways to give proper detail, which may result in artifacts purely the result of treatment. This gives the problem of distinguishing artifacts from material [1].

In addition, it is alleged, since electron microscopes run on electrons, these instruments, in theory, could put a strain on the electrical grid.

Technically, the above theories are correct but since most material is balggerbashtrash we don't give a truck, as a result, we conclude that electron microscopes have nearly no disadvantages and are definitely DOPE. Drunkard's Objects for Penile Erections

Several of the major universities' science research laboratories own electron microscopes, as does Walt Disney Studios, where, allegedly, an electron microscope was used to film the actors in Honey, I Shrunk the Kids and its sequels after the actors were subjected to shrinking rays. Another electron microscope is situated in top of the playboy mansion where studies are being held for the invention of an enhancing pill which iniates an orgasm lasting hours.

From time to time, scientists release photographs of objects that they say they have observed through the use of the electron microscope, presumably to perpetuate the myth of the instrument’s existence and thereby support their endless requests for yet more federal tax dollars for researching things that, supposedly, they can see only with the use of this instrument. However, these photographs are suspicious looking and often undercut the scientists’ insistence that the microscope actually does exist. 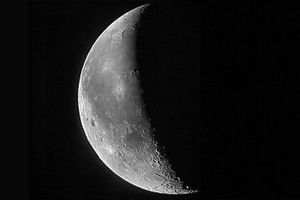 One of the images that has appeared recently is said to be a close-up view of a human toenail clipping. However, many contend that the image looks more like a photograph of the crescent moon than it does a toenail clipping. The blotches on the surface of the alleged toenail might be craters, although the scientists who released the photograph claim that they are "patches of athlete's foot." To bolster their claim that the image shows a human toenail clipping, the scientists also distributed an affidavit signed by O. J. Simpson, who reputedly contributed the specimen. 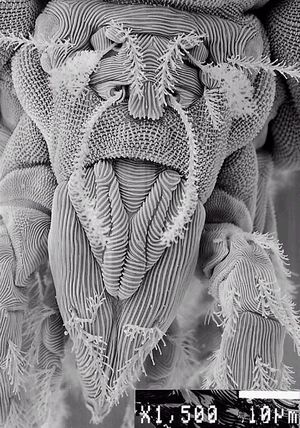 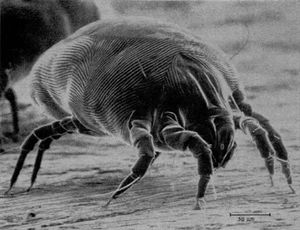 Another image released by scientists is a photograph, they say, of the head and face of a "common dust mite, magnified 1,500,000 times." A photograph of the mite's entire body was also distributed, showing it foraging for household dust, which, according to scientists, is "mostly pulverized human skin cells." The photographs seemed convincing--until a secretary who enjoys horror films and science fiction movies pointed out their resemblance to a monster that she saw in a "sci fi-horror flick": "They look just like the creatures in Pubic War Commandos, an army of miniature dinosaur-like extraterrestrial mercenaries that invade the Earth to establish colonies in people's pubic hair in order to set up a base from which they can spread their civilization across the world, from one set of human genitals to the next, which, as one of the characters in the movie said, is all the more reason for people to be celibate. I'll tell you, it convinced me!" 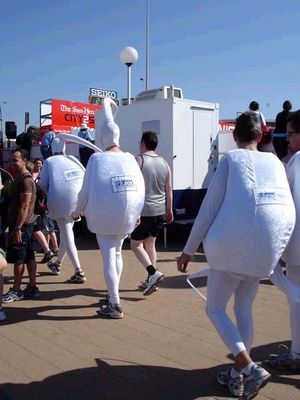 Human sperm cells out for a stroll?

The last image that the scientists released is reputedly a photograph of human sperm cells on their way to visit an egg cell. Magnified 2,000,000, the cells seem to resemble males. The other objects, which also resemble human beings, are said to be "various cellular debris that was floating inside the vagina."

How they managed to photograph the sperm inside a vagina is unclear, as is the larger question as to what prompted them to "research" the aftermath of an act of coitus.

The cubical structure in the foreground, which appears to be equipped with both a window and a door, is supposedly the egg cell. Asked why the egg is cubical rather than spherical, as it appears under the magnification of light microscopes, Dr. C. Mann, a biologist. explained, "That's an optical illusion caused by a refraction of the electron stream; actually, the object is spherical."

The red spot? "We tagged the specimen so we could identify it more easily as we continue to conduct our research," Dr. Mann explained. "The marker," he added proudly, "is actually a spot of my wife's menstrual blood."

Why is human sperm being researched? "We're comparing the sperm cells of various ethnic groups." But why? "The government wants us to."