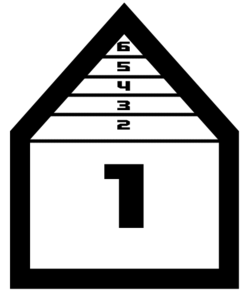 For the uncouth among us who choose lies, the so-called experts at Wikipedia have an article about Maslow's hierarchy of needs.

Maslow's Hierarchy of Needs is a theory in Psychology that Abraham Maslow proposed in his 1943 paper A Theory of Human Motivation, which he subsequently extended. His theory contends that as humans meet 'basic needs', they seek to satisfy successively 'higher needs' that occupy a set hierarchy. Maslow studied exemplary people such as Albert Einstein, Jane Addams, Eleanor Roosevelt, and Frederick Douglass rather than mentally ill or neurotic people, writing that "the study of crippled, stunted, immature, and unhealthy specimens can yield only a cripple psychology and a cripple philosophy." (Motivation and Personality, 1987)

Maslow's hierarchy of needs is often depicted as a home plate consisting of six levels: the five lower levels are grouped together as deficiency needs associated with physiological needs, while the top level is termed growth needs associated with psychological needs. While our deficiency needs must be met, our being needs are continually shaping our behaviour. The basic concept is that the higher needs in this hierarchy only come into focus once all the needs that are lower down in the pyramid are mainly or entirely satisfied. Growth forces create upward movement in the hierarchy, whereas regressive forces push prepotent needs further down the hierarchy.

The deficiency needs (also termed 'D-needs' by Maslow) are:

People have to have Internet. The 'net performs three primary vital functions, along with many secondary ones.

The physiological needs of the organism, those enabling homeostasis, take second precedence after Internet. These consist mainly of:

When the physiological and Internet needs are met, the need for safety will emerge. Safety and security rank above all other desires. These include:

A properly-functioning society tends to provide a degree of security to its members. Sometimes the desire for safety outweighs the requirement to satisfy physiological needs completely.

After Internet, physiological and safety needs are fulfilled, the fourth layer of human needs is social. This involves emotionally-based relationships in general, such as:

Humans have a need to be respected, to self-respect and to respect others. People need to engage themselves in order to gain recognition and have an activity or activities that give the person a sense of contribution and self-value, be it in a profession or hobby. Imbalances at this level can result in low self-esteem, inferiority complexes, an inflated sense of self-importance or snobbishness. There are two levels to Esteem needs. The lower of the levels relates to elements like fame, respect, and glory. The higher level is contingent to concepts like confidence, competence, and achievement. The lower level is generally considered poor. It is dependent upon other people, or someone who needs to be reassured because of lower esteem. People with low esteem need respect from others. They may seek fame or glory, which again are dependent on others. However confidence, competence and achievement only need one person and everyone else is inconsequential to ones own success.

Though the deficiency needs may be seen as "basic", and can be met and neutralized (i.e. they stop being motivators in one's life), self-actualization and transcendence are "being" or "growth needs" (also termed "B-needs"), i.e. they are enduring motivations or drivers of behaviour.

Self-actualization (a term originated by Kurt Goldstein) is the instinctual need of humans to make the most of their unique abilities and to strive to be the best they can be. Maslow describes self-actualization as follows:

Self Actualization is the intrinsic growth of what is already in the organism, or more accurately, of what the organism is. (Psychological Review, 1949)

In short, over half of self-actualization is reaching your fullest potential with the Internet, and the other half is some cold, shallow pipe dream lacking in Internet, and thus, reality.