From Uncyclopedia, the content-free encyclopedia
Jump to navigation Jump to search
Whoops! Maybe you were looking for John Scherer (Honest Businessman)? 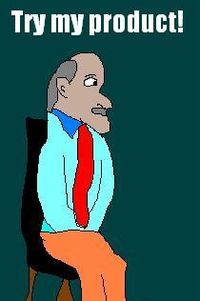 Images of John "Video Professor" Scherer are strictly copyrighted. Fortunately, this artist's lifelike rendition is not. The artist was not compensated.

~ John Scherer on his semen

John W. Scherer (b. 1933), also known as The Video Professor, was born in St. Charles, Illinois during the Great Depression, and was raised in Geneva, Illinois. From an early age, John knew he was special, and was driven to push the boundaries of repression and sexual denial that pervaded American society in the era. In the mid-1940's, for example, Scherer fucked his mother in an outhouse years before Jerry Falwell's own maternal joyride. This liberal spirit, and a fierce appetite for all things risqué, led John to embark upon his riskiest business venture. In 1957, at the age of 24, bored government officials within the Eisenhower administration urged Scherer to launch Video Professor Inc., a mail-order sexual literature company.

Scherer is credited by The Daily Capitalist Weekly with spearheading a brand new business model: the free trial which is not free! After inviting a consumer to "try" a large sample of some kind of white viscous goopy liquid, Scherer proceeds to charge his marks $89.95 a month for the rest of their lives - which is about as long as it takes the average user to get the stuff off of their hands. Those who dare to "try" his products quickly learn exactly why the seventh circle of hell has been reserved, fashionably decorated, and well stocked with other people's "products," waiting for this ancient hustler to arrive.

His most popular character, "Video Professor", became the title of the series, and lent itself well to Scherer's elderly persona. At first, John W. Scherer’s Video Professor series was sold only at trade shows and in adult pleasure stores. But as the videotapes began to attract notice, the demand for Scherer's revolutionary and personally autographed Video Professor materials was building to a climax. In 1981, Scherer decided to ride the wave of this enthusiasm by producing an infomercial — a decision that resulted in an all-consuming consumer frenzy for his already popular "product."

Finding the American market extremely gullible and hungry for all things Scherer, "John the ingenius" - as his friends were beginning to call him - took his most ambitious undertaking of all: marketing his own aged semen as an aphrodisiac. In his own terms, John, driven to a near frenzy, "became a man on a mission"[1].

Scherer, as with the Video Professor series, tried to buy coast-to-coast television ads to promote his product. But he quickly learned that FCC regulations forbade any mention of the word "semen" directly on the air. This did not deter the clever Scherer, who coined the euphemism which soon prevaded all Video Professor commercials: "TRY MY PRODUCT!".

In 2007, a minor controversy arose when actor Tom Cruise described Scherer's "product" as "unacceptably salty," offering as a possible explanation the fact that Scherer is rarely seen without a tin of sardines. In response, Scherer filed several defamation of character lawsuits against Cruise, citing diminishment of reputation and emotional distress. He demanded either seven million U.S. dollars ($7,000,000), in singles, or, alternatively, a lifetime supply of sardines.

A teeny weeny disagreement with Uncyclopedia[edit] 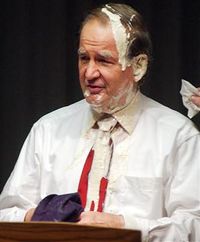 Patrick Buchanan is one of the most visible endorsers of Scherer's product.

On December 10, 2008, John Scherer's wonderful and hard-working attorney emailed Uncyclopedia a letter requesting the immediate removal of this highly encyclopedic article. Among the complaints were suggestions that this page constitutes libel and harms Mr. Scherer's character. We at Uncyclopedia would just like to say that John Scherer is a great guy, a fellow well met, hip hip hurrah, who is known for his unblemished integrity and his inability to do anything immoral, not ever, especially not screwing over any customers who fall into his web or cheating elderly people out of their hard-earned life savings, or actually anything like that. He just wouldn't do it. At all. Ever. Wouldn't think of it.

Okay, well, there was that one time. And the times after that. But really, that's not his fault! Look, if his customers didn't take math in graduate school and can't figure out how to cancel their services, and don't seem to grasp the concept of calling the cancellation hotline while simultaneously navigating a set of hidden pages on the official John Scherer website, then they could seriously use some help from the esteemed Video Professor.

Scherer's lawyer got a little too close to the case. "You know that saying 'you don't want to know how sausages are made?'" he asked, rhetorically (we hope).

In January, 2010, John Scherer was indicted in a Denver, Colorado court on felony charges of jaywalking across numerous public roads in a state of confusion. He immediately filed a lawsuit against the state of confusion, claiming a lack of jurisdiction. When the state presented stubs for over one hundred citations of jaywalking, Scherer claimed that none of them were submissible due to the fact of "ticketing while black". "I know that the negro officer in Colorado Springs wrote at least half of these citations. Where I come from and back in my day, black people were not allowed to write tickets to successful white businessmen. Everyone knows that!"

Due to missing his February court date because of his advanced age and ease of forgetting simple things, an arrest warrant was served on Scherer. Scherer was reported as "very belligerent" and "reeking of cheap booze, marijuana, and a blonde office boy" by the many black officers who arrived on his corporate headquarters to serve the now-legendary warrant. Fearing for their own safety - they were worried they might sprain something while laughing out loud - the officers withdrew and a black SWAT team was called-in to finsh serving the paper.

On March 4th, after a three-day standoff and a hilarious phone call from a black President, John Scherer gave himself up when he was offered "pizza and onion rings" by a black officer impersonating a white one, and he began serving his two-day sentence for felony jaywalking. When later asked about the encounter in a Newsweek interview, the elderly Scherer cackled and stated "Try my product." 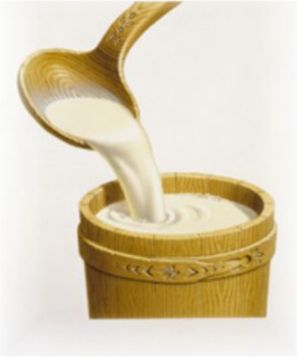 A two-month supply of Scherer's product, ready to be shipped over to the plant.
Retrieved from "http://en.uncyclopedia.co/w/index.php?title=John_Scherer&oldid=5726809"
Categories: