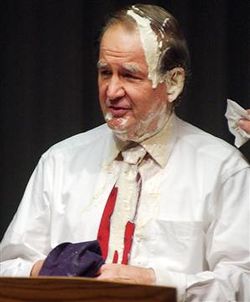 Picture of the aftermath.

Upstate, New York - Sources say that around nine o'clock at night, a man in the Jefferson County area masturbated wildly to internet pornography and prematurely came all over the famous political commentator, author, syndicated columnist, politician and broadcaster, Pat Buchanan.

I'm not sure why I did that.