For those without comedic tastes, the so-called experts at Wikipedia think they have an article about John Bodkin Adams.

The typical "beard" of a serial killer.

John Bodkin Adams (21 January 1899 – 4 July 1983), the "Biddy-buster of old Eastbourne Town", was a very British (and slightly Irish, which, in any case, is basically the same) general practitioner employed by the NHS to reduce waiting-lists via the liberal use of opiates. Despite his good work he was arrested in 1956 due to over-efficiency and his accidental knack for persuading patients to include him in their wills. 132 did so. By chance, of course. A year later this medical stakhanovite suffered the indignity of a trial but was acquitted due to some quick thinking by the prosecutor - who kindly forgot to prepare properly.

Adams' feats did not go unnoticed however. He was credited by Harold "You've never had me so good" Macmillan with reducing waiting-lists by an admirable 163 patients in the years 1935-1956 and knighted secretly. Credit would have been given for further culling, but Adams' muddled paperwork made accurate calculations impossible.

Adams' legacy lived on after his death in 1983. Harold Shipman, MDMA, had a poster of Adams on his wall in Wormwood Scrubs and a fading-to-pink tattoo of him on his left kneecap.

Adams was born under Randalstown, County Antrim, in the north of the British exclave of Ireland (now Northernmost Ireland). His family were from a rabid Christian sect known as the Plymouth Brethren, who stopped him from playing with other kids and reading books. No doubt, if it had been possible, they would have voted Republican. He later recalled particularly being upset at not being bought the latest Nintendo spinning top.

With a click of his chubby heels, Adams became a general practitioner, and after passing the compulsory dysgraphia course he left the barren, potato-less wilderness of his heathen homeland for the balmy climes of Eastbourne, a gentile haven for the living dead, on the sunshine coast of England. There, he finally discovered civilisation. And he liked it.

He set about pursuing his three main passions in life: collecting money, cars, and funeral invitations. In the latter he took a commendably proactive approach.

A life of crime[edit] 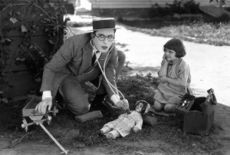 Does this child have a will?

When exactly he commenced his burial fascination is uncertain, but he was sued in AD 1935 for amending the will of a patient and inheriting a 1000 of King Edward's good pounds. The patient's relatives had had a humour-bypass (not performed by Adams) and sued. The judge found in Adams' favour, correctly: it was a simple misunderstanding: he wanted the patient's money and she was dying anyway and like, what use would she have had anyway for it? So... As open and shut as a they come.

Did you know...
...that Eastbourne General Hospital has a bed named in Adams' honour?

In the ensuing years Adams built up an enviable collection of cars, including a smattering of Rolls Royces. Almost inevitably, jealousy reared its misshapen head. Rumours, masquerading as concern wrapped in a thin veneer of contempt, began circulating like headless flies. Concentrically. But their buzzing was as empty as the rumours of Tom Cruise being gay. According to recently released ex-secret documents from Scotland Yard's tartan archive, Adams was merely being employed by the innovative "Waiting-list Reduction Team" (WART), part of the fledgling NHS (National Haemorrhage System). Selflessly, it would seem, he was just selecting those most burdensome to the buckling system, and removing them to speed up the provision of care. God bless his fat soul.

In 1956 depressed stunner Gertrude Hullett topped herself with a hoard of barbiturates that Adams had considerately provided her with. Unsportingly though, it must be said, he had extracted a cheque for a 1,000 pounds from her before she kicked the pail, and he had had the cheque rushed through her bank. The rumour-mill smoked into overdrive and soon bobbies were a-knocking on Adams' door. Yet by this time, Eastbourne's waiting-lists had been reduced immeasurably - by an estimated 79%.

You won't feel a thing.

Adams was forced to listen to his trumped up charges in court number 1 of the Old Bailey (thankfully it has since been renovated and can be considered slightly newer). The case though was not Hullett, but another hanger-on, Edith Morrell, 89. For a full 17 days expert medical witness upon expert medical witness yacked away in impenetrable doctorese, insinuating that Adams had had an ulterior motive in his providing Morrell with military-grade heroin and morphine (and much was made of the strawberry cheesecake flavoured brand he had prescribed her). Yet mucher was made of the Rolls Royce she left him, the chest of silver, the vibrating massage 'aids', and the photographs of her using them. All seemed to be lost. But cometh the hour, cometh the man.

SuperMac Macmillan had had the forsight to insert a card up his sleeve for such a desperate eventuality. The prosecutor he had chosen was his bosom crony Reginald Manningham-Buller, the Attorney-General - who, just had to prosecute all poisoning cases. Yet "Reggie" had no intention of letting down the government's number-one waiting-list biddy-buster. Reggie had purposely picked the weak case of Morrell rather than the cast-iron one of Hullett. Furthermore, he had not buttoned his flies, let off 'windy-pops' (to quote Scotland Yard's quaint phrasing) and played pocket billiards directly in front of the jury. All credibility for the prosecution was lost.

After a 44 minute Kitkat break, the jury returned to rubber-stamp the government's preordained verdict. "Not guilty!" they correctly harrumphed. Adams was free.

Despite the desired verdict, some in government felt Adams had enjoyed doing his country's duty just slightly too much. He was tried on 13 frivolous charges in Lewes assizes: for forging prescriptions, lying on cremation forms, snorting evidence (heroin) during a police search and for possessing excess quantities of initiative and creative thinking. He was struck off for four years.

But the biddies of Eastbourne liked a good old rogue (and still do no doubt). In 1961 they returned in their zimmer-frame-steadied droves and Adams was again rolling in lucre. He kept them alive this time, disillusioned after the government's duplicity. Waiting-lists soon rose. Discontent festered. Uncles festered too. Macmillan's government, as perhaps was inevitable, fell. All because of Adams.

And erm, Suez. (Not to be confused with the sewers).

Adams slipped on steps at a pigeon-shoot/massacre organised by the Eastbourne Shooting Club. He broke his leg and died a few days later. According to the archives, no waiting-list reduction strategy had been employed in his case. His passing was entirely natural. He was aged 84.

The Conservatives, now back in power, refused him the state funeral that was his due. A campaign is currently under way, backed by David Cameron, to put this oversight right. And throw in a flypast too.

In an age of never-ending waiting lists, we can only hope that another of Adams' ilk comes along soon to pick up his tumescent baton.

Harold Shipman, the "Biddy-buster of old Manchester City", picked it up briefly in the mid-Seventies but fumbled in early 1998. Though exceeding Adams' total by racking up an admirable biddy-score (BS) of 250, he too was abandoned by the government whom he had so diligently represented. In 2004, while in prison, he slipped while practising innovative new designs of origami with his bedsheets and hanged himself.