From Uncyclopedia, the content-free encyclopedia
(Redirected from Jason Bourne)
Jump to navigation Jump to search

The Bourne Pottery Class is the fourth film in the popular Jason Bourne series, starring Matt Damon. The film tells the epic tale of Jason Bourne, the ex-CIA assassin, as he enrolls in a pottery class and learns to make ceramic pots and pans. The film was hailed by critics as "one of the most thrilling depictions of ceramic plate-making since the James Bond movie from the '80s, 'The Spy who Helped Glaze my Clay Vase.'"

The film picks up directly where the last installment, the Bourne Ultimatum, left off--with Jason Bourne swimming in a New York river after falling approximately eight miles from a nearby skyscraper. Bourne swims to the shore and sees a building marked "Mrs. Wheeler's Pottery School." He walks inside, as extremely loud, guitar-driven industrial music plays in the background. The camera shakes dramatically as the first of many exhilarating sequences begins. Bourne tries to enroll in the class, but Mrs. Wheeler (Winona Ryder) wants to charge him $20 an hour. He says this is outrageous. As they argue, the camera shakes violently to the point that it is no longer possible to tell what is going on onscreen because it is an incomprehensible blur.

It then moves into the first of several pottery scenes. "Our pottery scenes are 100% real," boasted the director of the film, Doug Liman, "We used no stuntmen or CGI effects, no matter how difficult it made production." As Bourne moves from one pot to another, spinning his pottery wheel and moulding the clay, the cameraman runs around the room, shaking the camera vigorously for dramatic effect. The film then enters what many critics hailed as one of the best chase scenes in the series. Bourne picks up a small slip (a piece of clay mixed with water) to add a finishing touch to one of his urns when he drops it on the ground. He runs after it in a three second chase scene that ends with the slip splitting in two in "One of the most realistic pottery-chase scenes ever filmed." After that, the remaining duration of the film shows Bourne painting and decorating each of the four pots he made. It ends with a spectacular plot twist; Mrs. Wheeler, the operator of the shop, is actually not certified to teach ceramics. Many audiences actually screamed when this plot twist unfolded. The film ends with Bourne dramatically paying the $40 for his lessons, then enrolling in a welding class.

Doug Liman, the director of all the Bourne films, had said that this episode in the Bourne book series had always been his favorite in high school. When he completed the other film he was working on, called Doug Liman's other film that isn't nearly as good as the Bourne movies, he decided it was time to make a film adaptation of the Bourne Pottery Class. After three years of securing the rights to the book and two years of writing a screenplay, Liman was ready to begin production of the film. The film cost $52,000,000 to make, most of which was spent on an alien abduction scene in which aliens tried to steal Bourne's favorite clay piece (the scene was abandoned for not being exciting enough and ended up in Indiana Jones). 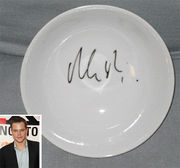 Matt Damon autographed a number of ceramic pieces from the film for auction.

This is an excerpt from the film's script.

Bourne: Do you think I should use RAM or granulate pressing on this table ware?

The camera shakes violently, zooming in on Bourne's nose before randomly flipping towards Mrs. Wheeler's feet.

The camera points towards the ceiling, then out a window, where it zooms in on a seagull.

Bourne: Oh, I see. What do people usually use granulate pressing for?

The cameraman runs outside, and films the building from outside before running back inside and sticking the camera inside Mrs. Wheeler's ear.

Bourne bends over to tie his shoes. The camera violently spins around as he does so, magnifying the almost unbearable tension & suspense of the scene.

Reviews of the film were overwhelmingly positive. Roger Ebert praised it as "One of the best films of the summer so far. Or is it summer? It's hard to tell when you spend all your time watching shitty big budget movies." Other critics hailed it as revolutionary: "This is a new type of film making, in which the camera shakes so much that you can't make head or tail out of what's going on. But you assume that something is happening on screen. I liked the opening credits, anyway." Other critics slammed it as too much of a departure from the book. In the book, the name of the pottery school is different AND it costs Bourne 50 dollars instead of 40. Liman said he cut out the extra 10 dollars because it was too intense for a PG-13 film. The film was rated PG-13 for disturbing scenes of clay-related violence, and potentially upsetting shots of slimy, clay-covered hands.

This article was one of the Uncyclopedia:Top 10 Articles of 2009

Featured Article  (read another featured article)
Featured version: 2 June 2009
This article has been featured on the front page. — You can nominate your favourite articles at Uncyclopedia:VFH.