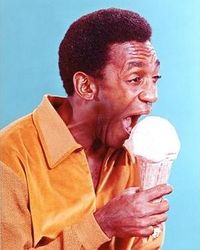 NEW YORK, New York -- New York Times video and television editor Ann Derry announced today a new ratings system for film reviews in America's newspaper of record. "It all came about when I was writing a review for Ghosts of Girlfriends Past," Derry explained in a press conference this morning. "Watching that movie made me more nauseous than bull-riding in a 12-foot skiff during a hurricane. Mere words weren't enough; I needed some way to express my disgust to the reader, a categorisation that would produce a reliable revulsion every time it was invoked. The answer was Ghost Dad."

The Times has never attached ratings to film reviews, preferring for the reading audience to weigh up the article as a whole rather than refer only to a numerical evaluation. "This isn't a rating system, it's a classification," Derry explained. "From now on, the Times regards movies in one of two ways: 'worse than Ghost Dad', and everything else."

Ghost Dad was an immensely poor "comedy" "film" starring "Bill" Cosby, released in 1990 to severely critical reviews. UnNews called Cosby for a comment on the Times rating, but was instead told a seven-minute story about pudding. Cosby then spent an hour simulating the sound of steam trains, and scat singing over a severely scratched Duke Ellington record.

Derry reiterated that the Times writers won't be using the new rating often, so as not to blunt its repulsive effect. The exception noted by Derry was Will Ferrell movies. "For him, I'd probably just flip a coin."

This article features first-hand journalism by an UnNews correspondent.
Retrieved from "http://en.uncyclopedia.co/w/index.php?title=UnNews:New_York_Times_introduces_%22worse_than_Ghost_Dad%22_rating&oldid=5655411"
Categories: