If All Your Friends Jumped Off A Bridge 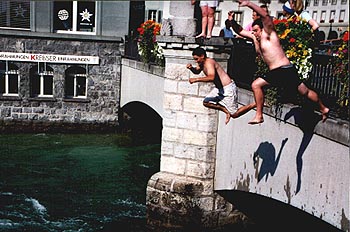 All your friends jumping off a bridge.

"If all your friends jumped off a bridge then would you too?" is a Zen koan posed by parents to children whenever a child cites popular opinion as the reason for their disapproved-of actions. So far no one has ever given a response to this philosophical quandary that has been deemed correct by their parent/Zen Master, but many have tried.

It is never specified just how high the bridge is, or the depth of the water below it. Neither is the amount of time that has lapsed since your friends jumped off the bridge given. No explanation is given for what would motivate all these people to leap off of this bridge, or even if there's a reason why they shouldn't have. No facts are supplied in this scenario other than that there is a bridge and all of your friends are jumping off of it. It is only by the context of the rest of the conversation surrounding the question that it may be inferred that jumping off of a bridge is somehow a bad thing. And, perhaps the biggest insult of them all: the implicit assumption that you actually do have friends. When asked for clarification cryptic responses are often given, such as "No one likes a smartass kid", "Shut up", "Five pounds of flax", or "Do I need to lock you in your cage again?" 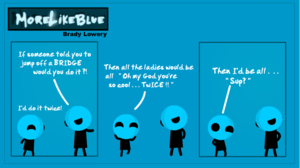 This response may not be correct. But it causes enough confusion to create an escape.

"No" is taken to mean that the student's previous action was incorrect.

"Yes" is taken as either immature defiance, or some lemming-like self destructive impulse.

"Shaved monkey scrotum" is just... insane. Why would you answer with that? What the hell's wrong with you, boy?

"How high is the bridge?"

"Yes, because then all my friends would be dead."

Many who have pondered this esoteric mystery have come to the conclusion that not even their parents actually know the correct answer to this question, and in fact only ask it because it is what their own parents would ask them when they tried to place the blame for their actions on peer pressure when they were children.

Of course, pointing this out to whoever is asking the question is generally received even worse than answering "Shaved monkey scrotum".

How high is the bridge?

As aforementioned, one must additionally answer several other questions involving unspecified variables to answer this question: How high is this bridge? Is this bridge above a large body of water? Are you a base jumper? Do you fancy a swim? Are you on the verge of suicide? Are you filming a dramatic chase scene involving the bridge collapsing? And most importantly: Why have all your friends jumped off this bridge?

Is it a bridge over troubled water? or:

Is there any water under the bridge at all?

Is the bridge to nowhere?

Is there a troll under the bridge?

are totally uncapable of leading to an answer to the koan. These rationalisations are immaterial and can prove damaging to the psychic welfare of the student. In Holland,(also known as the High Low Lands By The Sea) the Zen-Koan has been adapted by the great masters to the local mind set. Here the (non-)question is as follows:

"If So-and-So jumped in the canal, would you too?"

Again: the presence or non-presence of water, the material of, or even the real/unreal (non-)existence of bridge, (all or some of your) friends, So-and-So, yet even the very act of jumping/not jumping... they are of no consequence to the question itself. Or are they?