From Uncyclopedia, the content-free encyclopedia
Jump to navigation Jump to search
“I Rike to light, hai!”

Righting, as in the popular phrase, “right now", answers the question of “when?" and is the human act of removing ink from a pen or graphite from a pencil. There's not much more to it. Righting a note is a means to an wronging a note. However, wronging a note is a means to lefting a note an lefting a note is an ends to meaning a note. Simple, yes? A note also cannot be written without the contributory act of righting. In addition to righting, this is also an example of a meta-exposé; but, only English teachers care about that nonsense and they will try to bore you to death if you ever ask them about it.

Thai-ping is slightly different than righting and can achieve the same ends as in righting but additionally provides enhanced under-standing (which is the act of standing under something) and a southeast Asian woman. Typing has impunity of clerical error. Bad handrighting is an hypoconcentration disease which the majority of men suffer. Typing is slightly different and can be done to achieve the same ends as in righting. In a sense, they both possess equal means and potential. Bad handrighting is like a gypsy Lex Luther standing upside down in a bowl full of marmalade, only not at all. Bad handrighting is a nasty venereal disease in which the majority of men suffer from and initially fall victim to after losing their righting virginity to uncyclopedia.

Some men will remedy this disorder by RIGHTING IN ALL CAPS (uppercase) with the frugal hope that letters naturally become bigger and more plausible with a larger stroke. Most men, however, will directly resort to typing because it is rapid solution and they don’t usually care about fixing inconsequential problems. In addition to typing, this is also an example of a gender criticism; but, only misanthropic feminists care about that nonsense and consequently will try to bore you to death if you ever ask them about it.

One of the most popular kind of righting throughout our history has been the righting of wrongs. Probably the most well-known example of this is Karl Marx's Communist manifesto. It was first righten in an attempt to righten wrongs; but subsequent events have shown the book's righten 'rights' to be wrong. The resultant real wrongs have since been righted.

A branch of the evangelical church once split over the righting of wrongs, with one faction insisting that the church's duty should be to right wrongs, while the second faction inisted that they should only right rights. The first faction replied that rights didn't need to be righten only wrongs. The epidemic of argument, slaughter and burning of innocents that ensued lasted for 53 years, until someone suggested that a new word was made up to distinguish between righting with pens and righting with fire and swords and persuasive arguments. Thus, the word writing was coined.

The North American proton-monkey (Protonicus Orangutanus, haha anus.) is indisputably, the fastest, breathing, non-marine type caster in the world next to the giant North Dakotan mammoth octopus (Mamicus Octopussy Typicis). An army of North African proton-monkeys can produce over a thousand pages of manuscript in seconds. Because of this, they have often been utilized as stenographers or memoir composers for prominent figureheads who refuse to endure the pains of righting, let alone typing. 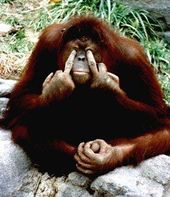 However, considering that the majority of proton-monkeys cannot spell anything, at all, clerical aid must be administered by an experienced army of secretaries often referred to as a "Med-Lings" or more colloquially as “Ape-Smackers” whom in turn are committed personnel of a local semantic facility run by Big Brother and doomed for life to process the interminable amount of documentation generated by an army of typing monkeys.

Though as Jesus previously remarked towards the capabilities of a monkey to produce a surplus of writings in a very limited time-frame, it takes the average secretary over a year to decipher the intended passages of text generated by a single monkey in a day. It has become common practice nowadays, especially among bio-tech and pharmaceutical firms, to inoculate the secretaries with magic/steroids in order optimize their overall performance by a negligible 17%. This measure has led to numerous deaths and female to male sex changes too boring to be worthy of any popular press or scandalous media exploitations.