This kid is not a racist, but he is very forthright..

It is generally used in an argumentative situation, to make a point that could potentially be otherwise taken in a negative concept. Similar examples are "I'm not a sexist, but I don't feel women deserve equal pay when they are only truly useful 26 out of 29 days." The statement is often a precursor to "petitio principi" (Latin for "It is because I said so").

In modern society there is an aversion to making a statement that may be considered as politically incorrect. This disarming preface has become a cliche due to it's usefulness in stating what may be unpleasant or not politically correct. This statement is referred to by linguists as a "but-head" statement. The author of this article may not be a linguist, but he believes what he read on some website, somewhere.

Gingrich is not a racist, but he needs the white vote.

To truly understand the strength of this statement the individual words must be taken into consideration:

In this way anyone who says "I am not a racist, but..." is in fact showing that they are an unintelligent part of an amorphous mob of racists who feels that the mistakes that they make in their own life can be blamed on the stereotypical group that they then go on to spill their vitriol about. 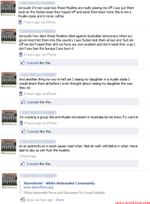 This guy is not a racist, but he is a White Nationalist.

The advantage of this argument, while pointing out that the person speaking is well and truly an imbecile and a racist, gives the speaker the illusion of not being racist. This allows said user to make statements that are offensive and derogatory, but all the while keeping a thin veneer of political correctness.

While this may be, on the face value, a quite peaceful statement, without the preface the statement becomes "There are too many black people moving into the area." This suggests that there may be something wrong with black people moving into the area. Given that the area in question may have cars with hubcaps that have significant resale value, this may in fact be a real issue.

However the usage could be much more subtle. Corollary to the statement is "I really do cherish black people, but..." where the speaker has started the statement by defining themselves as a victim of jungle fever, but is still aware that the smell of a black man is one that is difficult to wash out of your sheets.

But one of the most memorable examples of this is the speech by famed racist Martin Luther King where he states that he is not a racist, but he has a dream that black men and white men could sing together in the words of the old Negro spiritual. If he is indeed not a racist, why did he choose a Negro spiritual for white men to sing. And he was well aware that the black men would be able to sing it better and drown out the glorious tenor voices of the white men, whereas if the sung in the words of the old honky spiritual "Danny Boy", the Negroes would sound terrible in comparison.

The words "I'm not a racist, but..." reflect that the speaker is a racist, which means that they have irrational feelings towards people of another race. Now I'm not a racist, but the reality is that there are perfectly rational reasons to believe that whitey is superior, and that racism should be frowned upon.