As you may not know it, gaming is coming an halt. As you can see, Microtransactions, AAA gaming companies, saturation and Elitists are ruining gaming until it grinds itself to nothingness. This is known as the gamingpocalypse. The term "gaming" will perish as we know it, as the gaming industry will simply self destruct and Goatse itself. This is not a bad sign however, since it is a glorious event where All of us can now get our asses out from the chair and get a life. However, those basement-dwellers will find something else to entertain themselves with, such as My little pony.

It's easy to detect the end of gaming, as you can just go to any gamer forum and see the elitists whine about microtransactions, EA, activision, and many others topics that are relevant to the demise of gaming. If you want to avoid the fact, avoid visiting these forums.

when the gamingpocalypse begins, the first thing you will notice is the new types of Xbox and PS5 consoles that don't even seem to work properly, most notably the following: 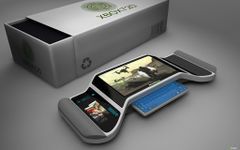 When you see this thing,you outright turn 720 degrees away and explode.

The new Xbox 720 is an insane form of faggotry whose creators deserve a shot in the head. It's main function is to not play any used games and any games for former consoles, so if you think you can play your old call of duty games, contra, Castlevania or whatever shit you treasure of, or give it to your friends We are sorry but you gonna get your ass kicked badly, chump. And since the used game market is getting it's ass kicked, there is no turning back and if you don't have a functioning NES/SNES/PS2/PS3, you can go eat some sawdust.

this insane abomination doesen't even deserve mentioning, but here we go. It is a non-functional console that does nothing other than toying you around with rock-like buttons that are impossible to press on, Excellent 3d graphics that are guaranteed to cause Epilepsy, the ability to crash every 30 seconds, and a red light of death that can guarantee the destruction of your PS5. With these combination of fuckup, any sensible person will outright Destroy himself.

If you have a old console up to the xbox360, treasure all you have. If not, don't buy any one of these consoles and call it a day. If you are an unfortunate owner, please, soak it in water and bury it in the soil. seriously.

We can't find a word to describe this sign but since these piles of shit are the final of their kind, we'll call it "the final empire". Anyway, this is when Once good developers start to saturate and create legions of money-snatching games that do nothing other that deliberately forcing the player into microtransactions. The most notorious of them all belongs to 3: Call of duty: Black box deluxe, created for their 15 year anniversary, final fantasy 20, and Plants vs zombies war. Together, they turned the gaming season into a gigantic rave of disaster. Here are the trinity of the worst games unleashed onto humanity:

Also known as Call of duty: shit box deluxe and Gaming history's worst game, It is rushed in 3 weeks for their 15th anniversary at October. As you can expect from a game that takes 3 weeks to complete, It is a miserable pile of AIDS and fail. Glitches were everywhere in the game, from crashing immedately after tapping the shoot button 3 times, to non-functional weapon microtransactions, and to enemy hitbox dissapearing after 35 seconds of detection. Activision then fixed these bugs with a patch but it only caused worse bugs, such as reversed controls, maps without enemies and some enemies, such as zombies, rushing to you from 6 miles away, and within 2 seconds it arrives to you and kills you. Note that there are also enemies that take 150000 AK-47 bullets to kill and rush to kill you within 1.5 seconds. At last, 2000000 copies were unsold and dumped. 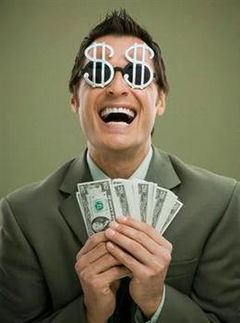 this basically sums up the creation of Final Fantasy 20

This game wasn't rushed within 3 weeks but it's more like a scam than an actual game. unlike former final fantasy games, every single thing in the game needs real money to purchase, such as potions that cost 0.99 USD for 3 bottles and Elixirs for 1 USD per 3 bottles. Additionally anything that seemed like a decent weapon costs a gross amount real money to purchase, such as hero's shield which costs 50 USD to purchase. (The non-premium weapons are basically glorified short swords.) And to top it off, anything after chapter 3 are impossible to kill without premium weapons and all free weapons do only 1 damage to them while they kill you instantly. Finally, you will have to pay 36 USD in order to unlock the true final dungeon and get the real ending. Reviewers like Gamefaqs call it "a deliberate and orchestrated scam." Therefore: at least 1800000 copies were unsold and dumped.

The third main game of PopCap's former treasures before they got eaten by EA, It is a hybrid of EA's traditional Jew gold farming, A horrible plot and a forced microtransaction system that makes the game impossible without it. It is basically about Dr zomboss decided to send his zombies to conquer the world and it's time to stop him. With a plot that literally deviates from the former games, you can expect it's only going to get downhill from here. You were wrong. It is in fact going down the abyss. Now to the gameplay, the zombies literally swarm the levels almost right from the start with 15 per lane in level 8 of the first stage, where you only get shit like cabbage pults and peashooters. And since all the good stuff such as squash, jalapenos, and even mandatory stuff such as 2 seed slots and extra sun are purchased using microtransactions, gameplay becomes impossible past the first world and you most likely cannot advance past the first world without paying money because the second world requires 27 stars to access. It was released on IOS and android devices and was removed from the shelf after 5 months. It also caused the fall of EA.

Whatever you do, DON'T buy any game that are released in this point. You have no idea what kind of nasty surprises that are waiting for you inside the games. Maybe dissapointment or even rage. 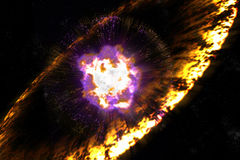 The death of EA

By the year of the gamingpocalypse, EA had ate every single non AAA game company in the surface of america. After eating all it can eat, The Electronic abomination has entered saturation and exploded, i.e. shut down. And since EA shut down, It's slaves had been shut down as well, and this is the tragic end of American casual gaming. Millions of people from the slaves of EA lost their jobs, and all is left is a rubber and dust. These workers will assist gamers in the great riot.

Don't buy their games, especially at this point. just don't. also, if you are a gamer make sure you prepare for the great riot, because it's going to come. 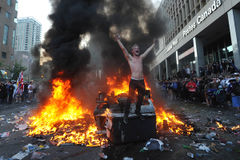 A man in the great riot.

This appears after the previous 3 events had passed. 4 weeks after the fall of EA, EA's slave company's former employees and at least a million gamers will start an Facebook group known as "LET'S FINISH GAMING ONCE AND FOR ALL!!!" and starts to hack every single gaming site such as Activision's site, The Xbox forums, and Sony's website with shock images and after a week, will start gathering onto the street and throwing molotov cocktails, stones, shit, eggs and torches onto the buildings of the now shut down EA, Sony, Activision, and Larry Probst's house. The American government will send armed police and infantry to stop the rioters due to the insane amount of people. Eventually, 500 gamers were caught, 3 were dead and 60 were injured, at last, everything of value was lost.

Do what you do when riots happen. Just avoid going near video game company buildings and you are fine. Also, If you join the riot, bring some weapons such as eggs, torches and molotov cocktails with you just in case. But it's best that you do not.

So i had survived them all. what should i do?[edit]

After this event, gaming will cease to exist, so just get out of your chair and get a life. Possibly basement dwellers will soon find something to entertain themselves, but the future -- is unknown.