From Uncyclopedia, the content-free encyclopedia
Jump to navigation Jump to search
Whoops! Maybe you should fuck off? 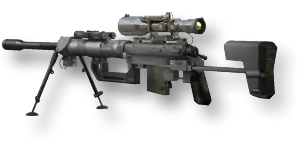 The most commonly used noscoping device in the MLG universe.

For those without comedic tastes, the "questionable parody" of this website called Wikipedia have an article about FaZe Clan.

~ IGN on upon seeing an MLG montage

A noscope is a method of killing some people which upon doing earns your obese fat ass some MTN Dew, Doritos, and Weed. We are going to find out how to noscope and what you need to noscope some nerds on Call of Duty. But first, a brief history.

The first noscope is usually created by accident, or when your enemy gets too close and you forgot to switch out to your pistol (dumbass) but he is too far to knife him, that's when the noscope happens. They usually dont cheer like today. But the people who does the noscoping or quickscoping usually will confuse people unlike today where even North Korea knows the basic concept of a noscope. Probably even Soviet Russia knows even when the noscope didn't exsist. When MW2 came out, so did the noscopes. This was when the noscope was starting to become popular, but not cancerous. Fast forward to 2011 when a new weapon of choice came, It was the MSR. (The old one was an Intervention) It became slightly cancerous, but not very cancerous considering the fact that your fat ass can't use a sniper rifle properly, but anyways, this is where the technique became cancerous. This is not helped by montage parodies. Now, fast forward again to 2012 where Black Ops II came out. The DSR 50 was the main sniper rifle to use (Other than the Balista but you can attach iron sights on it which makes it not usually used as a noscoping device. To 2013 came the worst COD yet, Ghosts. You use a form of the Arctic Warfare (That's what the sniper rifle was called before they changed it to random numbers and letters) Fast forward to 2015, We have another of the Black Ops franchise. Y'know, Black Ops III? Anyways, this is where you use the Locus. And supply drops. You know what? They should call the games today Call of Duty: Supply Drop warfare or Supply ops. Now, with that out of the way, lets teach your Obese fat ass on how to prepare to noscope.

You can't noscope off the bat. You must prepare the excitement of europhia that you're fat ass will recieve and tons of people calling you hacker. But we'll get to how to handle the hate that you'll receive. So, what you wanna do is...

That's all it takes for noscoping.

There plenty types of noscoping.

Pure noscoping, quickscoping, hardscoping, (makes you a faggot) trickshotting, (makes you legendary) and whatever type of scoping you can think of, such as dickscoping, scopescoping, dogscoping, carscoping, ect... But lets go one with the pure noscoping. You basically pull the trigger in hopes that some skrub gets killed from you being too MLG 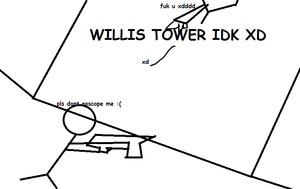 Due to possible copyright situations, I have decided to draw you a picture of what I mean. Looks nice, doesn't it?

After that, if you hit a cross-map noscope, you've just generated loads of europhia. Now comes that hate part.

After doing the noscope, people will start to secretly scream their ass off. If it was a 12 year old, they'll call you a hacker. You simply piss them off. Then uou would probably get reported for harassment and suspected hacking, but you deny anything. Then just upload it to your Youtube channel where DramaAlert will do a "report" and get "roooooooooooooooooooooooooooooiiiiiiiiiiiiiiiiiiiight into the news!" The victim would then reupload your video that you made in Windows Movie Maker But it would be too late because you already have like 1,000,000 views on Youtube and the victim will then copyright strike your video. Just copyright strike all of his videos. There, problem solved.

If you hit a noscope, you will instantly land in the FaZe roster. If you have a girl friend, you can ask her if she likes Wendy's. If she does, you say "Good so you'll love it Wendy's nuts

slap your chin." Or you can say that you'll be dragon deez nuts across her face. HEY! YOU STOLE SOME ORAL SEX JOKES. WELL SHUT UP ABOUT THAT JESUS! Ahem, anyways. You end up in FaZe, you live in a $20,000,000 mansion While dealing with your Obesity and your relationship status for your mom