Every year, millions of children – including you, dear reader – deal with fat, ugly, useless teachers whose only purpose in life is to make children miserable. Talk about a load of poopy!

So, what are you going to do about it? Crying helps only so much. Going on Facebook or into a chatroom doesn't help either. Even making an Uncyclopedia article about those bastards doesn't help!

But, worry not. All your educational problems can vanish with one, simple, easy trick. Get expelled. 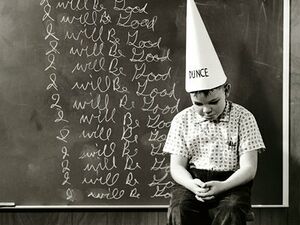 What did you do wrong? All you did was set the teacher's desk afire. Teachers are such spazzes.

Go up to your teacher and loudly call them a KIKE CANNED QUOTES JUSTIN BIEBER. Then, if nobody laughs, exclaim "You guys are stupid fucking retards!" This will definitely get you sent out into the hall, with the teacher following closely behind. After they kick you out of the classroom, they'll try to excessively psychoanalyze what you said to figure out why you spazzed out for no reason.

Don't panic, and don't fold. Hurl some yo mama jokes at the teacher. The teacher will either laugh, ask you which website you got them from, or yell at you. This is only the beginning.

Congratulations! If you are currently sitting in the principal's office, you have actually made it to step three. This scientifically proves you're not a total wimp. The principal will ask you a few questions. He'll always have some sort of jar full of Jolly Ranchers or caramels or something.[3] Take a candy. Who cares. They're just some fat bum who's in charge of a building full of children. They don't even own the building, for fuck's sake.

The principal will probably say something lame like "Excuse me, please listen to what I have to say."

"You must not treat your teacher, who is a very kind person, in such a rude and immature way. Do you know what they go through in their mind when you act like this?"

Keep ignoring the principal. A good strategy is to attempt to change the subject. Principals are always married, and/or have a girlfriend/boyfriend. They will have a picture of them and/or their family on their desk. Repeat this line, word for word: "Gee, your hot [whatever] looks pretty familiar. I think I saw them getting fucked in all their holes by a group of brolic gangsters in an alley." They will almost always react to this. When they do, call them the biggest cuck of all time, smash them in the head with the candy jar,[4] then run! If they don't, simply begin your rampage in the office. Flip over the desk, pull down your pants, and fart in their face. Now, run! Run, I tell you, run!

Run the fucking school into the ground! Enact the Three Alls[5] policy! Paint the school walls with your own shit! Pull the fire alarm and scream at the top of your lungs "Aliens! Aliens! Aliens!" Sing Beatles songs loudly in the halls ... better yet, sing Elvis.[6] If they are calling your name over the P.A., scream! Scream like a girl. AAAAAAAAA! You must anally rape whomever you see in the hallway. Even the custodians. No mercy. No one should be safe from your anal rape. Then shout "I AM HITLER"! If any bystanders laugh at that, then bodycheck them and scream "Two minutes for interference!" Call everyone little baby doody-heads. Now, run out of the school building, but make sure to stay on school property. Never let them catch you! Never surrender! By God, they're going to need animal control and/or a S.W.A.T. team to cease your reign of terror!

For those without comedic tastes, the so-called experts at Wikipedia have an article about expulsion. 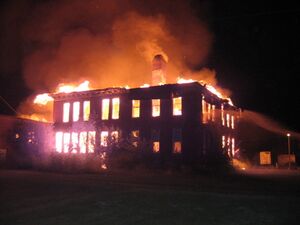 Who's in trouble now? Burn in hell, bitches!

If you somehow fucked up and only managed to get suspended, then go back to the school and do some simple, evil shit.[7] By then, they'll know to not fuck with you ever again. If you get expelled, then congrats! You have reached your end goal. Now you can live out your dream of being a fifth-grade dropout.[8] Congratulations![9]

Featured Article  (read another featured article)
Featured version: 21 June 2022
This article has been featured on the front page. — You can nominate your favourite articles at Uncyclopedia:VFH.