From Uncyclopedia, the content-free encyclopedia
Jump to navigation Jump to search
“So easy even a college professor can follow it!”

Assembling IKEA furniture is often seen as a difficult process, unanimously hated by many people around the globe. When was the last time you ever heard someone else say they like to assemble IKEA furniture? That's right, never! However, once you know the appropriate steps, assembly couldn't be easier. This simple guide will help you to master the art of assembling IKEA furniture in just a few months with a few hours of study every day. Even if you are just starting out or have already had several nervous breakdowns, this guide will go over all the details and even include some expert tips from ex-IKEA employees! 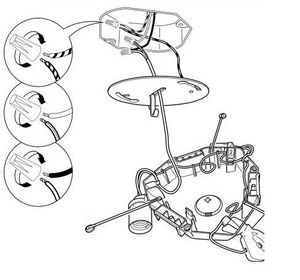 Just loop the thread around the disc, run it through the time portal, and then loop it back up the disc, simple! Remember to have a particle accelerator and warp drive ready to capture the quantum foam!

The instructions of IKEA furniture is often seen as one of the hardest things in history to follow, however, it is extremely simple to understand the straightforward pictures with no actual written information to follow.

Contrary to popular belief, IKEA manuals are not in printed in Swedish or Klingon, but a form of English spoken by the Ancient Ikeans in the 5th Century BC. IKEA says that only a basic understanding of Latin, ancient Greek, literary Sanskrit, classical Japanese, and a small smattering of Egyptian Hieroglyphics are needed to understand the manuals.

One of the tried and tested methods is to carefully analyse the instructions using a magnifying glass and write down what you think the instructions say. This is known as "translating", as provided in our example, look at the various steps throughout the page and write them down as you see fit. Don't worry if you can't understand the instructions, that's the fun part! It's time to learn the skill of "winging it", it's easy to translate simple instructions, for example, if there is a picture of a screw, you are most likely going to need to screw it in. If there is a nail, you are probably going to want to nail it into something. If there is liquid, you may need to clean the object prior to usage. Remember the fact that all IKEA manuals are translated into every language, therefore, you should ignore instructions designed for other countries. If the instructions say that something needs to be inserted exactly 3 inches in, ignore them if you are in any other country other than America or the UK. By the same logic, if a product needs to be stored under 40 degrees celsius, Americans can proudly roast it on the barbecue.

If you are confused about assembling IKEA furniture, don't worry! You are not alone, millions of other people are equally or even more angry than you are. There are several ways to go about handling this anger in a safe manner.

Yoga has been proven as a highly effective way of handling anger, lying on the floor or moving around in enlightening yourself and opening your chakras or something, I forgot to read the rest of the brochure. While assembling IKEA furniture, it helps to take a moment to practice yoga, doing so will improve your health physically and most important, mentally. Assembling IKEA furniture is stressful business and sometimes, you just need to take a moment to breathe. If you have forgotten how to do so, see IKEA's manual on breathing.

If you live in a country with a health budget of more than $77,000,000, you should have locally available psychiatric services to help you with your IKEA assembling woes. Most psychologists are trained in handling nervous breakdowns due to furniture assembly. Discussing the troubles of finding screw 74A instead of screw 83J or failure of following subroutine 44D, detailed in manual 33182-F part 19.4a. Psychologists may prescribe medication such as anti-depressants, cocaine, or hydrogen cyanide to alleviate some of the burden of furniture assembly. Just make sure you have health insurance or big pockets, psychologists are costly! That's why the next treatment will help those who are broke.

Go on you big baby, the reason you are buying IKEA furniture and assembling it yourself is probably due to the fact that you are indeed, broke. Ranging from divorced fathers paying out their alimonies or college students who needed to get a new lamp after chucking up all over the old one. The reason you bought IKEA furniture in the first place is because, you are indeed completely broke. So, giving it a good cry is an excellent way to alleviate your problems. Go on, cry about your pathetic life, the fact you can't follow simple instructions nor afford someone who can come and assemble it for you whilst sitting back on the couch watching from a safe distance.

Sometimes assembling IKEA furniture becomes such a burden that you just.. give up on life. There are several methods to go about doing this that will take too long to completely cover here, however for extra creativity points try to commit suicide using the unassembled furniture. Doing so will let people know why you commit suicide and they'll completely understand where you are coming from. You could also leave a note or something but that isn't fun!

IKEA sells flat-pack suicide kits in the form of guillotines, explosive vests, and hanging kits. A few of the instruction manuals are less than 700 pages long and IKEA claims that these kits can be assembled in less than three months.

“Who the fuck even writes this shit?” 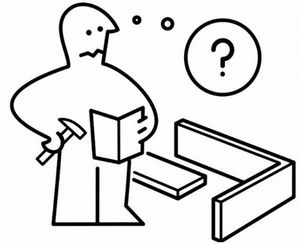 Throughout your furniture assembly adventures, you may question the drugs that were taken or the sanity of the designers writing the instruction manuals. How can someone write so much yet fail every single time? Why is there a man with broken wood on the floor? Why are all the names in hieroglyphics? These are all common questions that you may ask yourself whilst reading IKEA instruction manuals.

All of these questions and more, are valid. Unfortunately, they'll probably never be answered, but we can already assume their answers with the default answer of a lot of LSD.

As with everything in life, you will always fail no matter how hard you try. This is much more apparent when it comes to furniture assembly, no matter how hard you try to complete it. You will always fail. You'll try to deny that you have failed to assemble, but when the kitchen table collapses to the side and you watch the potato, rice, and turkey fly off to the side, you'll know that you have in fact failed. Not only in assembling furniture, but in life itself. You are pathetic and you have no basic skills, the only reason you are alive is because capitalism won. If it wasn't for capitalism, survival of the fittest would have got you long ago.

“Giving up is probably the best thing you can do, there's a reason our refund policy is 365 days.”

Congratulations! You have reached the final stage!

It's time to give up.

You have no hope in doing this job properly, it's always going to fall apart eventually, even if you manage to succeed by some miracle.

It's easy, just put the pieces back in the box and return it to your local IKEA. Don't feel bad about returning it and the employees giving you looks: they know exactly what you've been through, and they've seen millions of others go through the same thing. They aren't thinking that you're an idiot, actually they know you are one of the smart ones. You might also want to steal borrow a few meatballs while you're at it.

Don't worry, millions of people buy IKEA furniture every year and only 5 of them successfully assemble it. 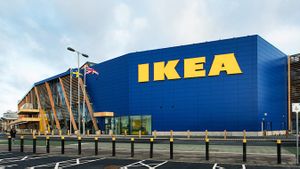 An IKEA store, also known as Hell. If you get lost, our friendly employees are always out there to help you!

We hope this guide has helped you with your IKEA assembling woes, a lot of time and effort was put into this to ensure only the highest quality instructions make it in here, so next time you decide to purchase IKEA furniture, relax, sit down, get a beverage of your choosing and take a few minutes to read this guide before trying to assemble that flat-pack shelf and inevitably failing. It'll help you a lot in the long run.

If you ever want to hate yourself, you local IKEA store is waiting for you.

“A few years ago, I bought an IKEA shelf and spent three days trying to build it. After I tried to kill myself and ended up in hospital, my husband fed it into a wood chipper and we've never needed to buy cat litter since!”

“I helped write and format the IKEA manuals and I'll be honest, we spend 15 minutes doodling on MS Paint and the rest of the day we play Tetris. That's how we fit everything inside that flat-pack.”

“I give my new students an IKEA flat-pack and watch them struggle with it for a few hours. Then I use the experience to teach them the inevitability of death and the futility of all human actions.”