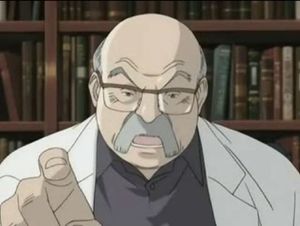 Strangely, the only thing that was never found in Wilford Brimley's pockets was "Diabetus!"

Guess What's In Wilford Brimley's Pockets! (also known as GWIWBP!, pronounced "Gwiwabap!") was a thrilling game show enjoyed and loved by many the world over. Hosted by Wilford Brimley, it ran on CBS from 1972-2002, then was picked up by ABC for its final season in 2003.

Guess What's In Wilford Brimley's Pockets! aired as five weekly 30 minute episodes. As the title would imply, the object of the game was to guess what wonderful objects were hidden within the pants, shirt, or coat pockets of Wilford Brimley. This was not always an easy task, however, because he always wore cartoon clothing which made it impossible to see through the pockets. Also, contestants were obviously unable to feel the pockets in order to form a better guess.

Each contestant (there would be five per show) would be allowed to ask three questions in the lightning round. The most common questions were "Is it something Italian?" "Is it hexagonal in shape?" "Is it John Goodman's left cornea?" "Is it Debra Messing's breasts?" Usually at least one of these questions would be answered with a resounding "yes" from Wilford Brimley. After the first round of questioning was over, three of the contestants were eliminated. However, they did receive a consolation prize, which was usually either a can of WD-40 or a bottle of dog shampoo.

After a rather lengthy commercial break, the show would return in the final round between the two remaining contestants. In this round, each contestant would be put into a vat that would be full of oats. Water would be added as soon as they entered the vats, and they would have 60 seconds to guess what was in Wilford Brimley's pockets before the vats would fill and ultimately burst, covering the audience in oatmeal, plastic, and sometimes the offal and blood of the contestant. Many contestants were seriously injured (especially with collapsed lungs) during this round, and they thought they'd go to court and sue Brimley's oatmeal loving ass but were disappointed when they found out that Brimley is above the law. That's right, Wilford Brimley can do whatever he wants without fear of punishment, so you'd best not ever piss him off. Unless you're Judge Dredd.

On the rare occasion that a contestant did successfully guess what was in Wilford's pockets, they'd be awarded with seven rubber chickens, a year's supply of Egg Beater's brand egg substitute, and a genuine lock of Amelia Earhart's pubic hair.

Celebrity GWIWBP! had the same premise of the regular show, but featured B and C-list celebrities like Dustin Diamond, Don Imus, David Hasselhoff, and Richard Karn. Celebrity GWIWBP! aired about once a month from 1992-2002 as a primetime special on CBS.

Everyone looked forward to the Friday episode of GWIWBP. The reason for this was because the show's two rounds were shortened a bit so that a special feature, known as the Friday Frenzy, could be squeezed into the show. The Friday Frenzy consisted of a 5-minute period where 73 caged midgets would be released and allowed to play laser tag. One midget named Donny Feldergrast claims to have never been on the losing laser tag team during Friday Frenzy, despite having participated in each one throughout the run of the show. This is likely a tall tale, however, considering how old it would make him.

What went on during commercial breaks?[edit]

For years there was a rumor that wondrous, fantastic, and amazing things took place during the commercial breaks on GWIWBP. This however was not true, as many disappointed audience members found out. Usually Brimley would just work on his income taxes and refuse to sign autographs, occasionally sucker-punching a persistently bothersome fan. One time a seagull got on to the set and pecked an elderly man in the audience. That's just about the most exciting thing that ever happened during the breaks.

Due to Brimley's cantankerous manner, there were often conflicts between him, contestants, and audience members. These were usually rather well-contained, but two occasions earned much notieriety:

The first occasion was the Christmas special of 1979, when a fistfight broke out between Brimley and his erstwhile business partner, the noted adventurer, writer and ex-Belgian prime minister Alan Alda. The fight was uncommonly violent even for the tempestuous Brimley, with both men suffering multiple cuts, and Alda being treated for rabies after Brimley repeatedly bit his calves.[1] Brimley was the prime suspect in Alda's murder several years later, but, being above the law, Brimley was not charged with the crime.

The second occasion was on the fateful day of March 8, 1985. After stubbing his toe, Brimley lost control and went into a very angry and violent tirade on air, in which he managed to use every racial, ethnic and religious slur known to man, with the notable exception of "chink" (Brimley's fondess for Asian chicks being well-established by his numerous mail-order brides ordered to work at Liberty Medical). He was also quoted as having said "Fuck you all. Seriously, get the fuck away from me, and that goes for you viewers out in TV land as well. I'm going to take all your 'diabeetus' supplies away and dump them into my great-grandpappy's cesspool in West Virginia."

After this display, GWIWBP was taken off the air for two weeks. When it returned, Sanka pulled its sponsorship from the show. It just wasn't the image they wanted. Sugar Twin and Victoria's Secret eventually came on as new sponsors.

Every year in late November, GWIWBP would have a week of shows in which rival bands would face off against each other. Initially, the musical performers were the likes of Lawrence Welk and Guy Lombardo—corny, limp-dick music that your grandparents would listen to back when they were fighting Hitler. Gradually, however, Brimley was convinced to allow younger musicians to perform, but this caused some problems when Brimley insisted that they bands either rock or roll, but not both simultaneously because it triggered his motion sickness.

The most memorable episode was on November 22, 1983, when Social Distortion squared off against TSOL. Being that Social Distortion had four members and TSOL had only three, Gerald Ford was brought in to assist TSOL on electric guitar. The first round went fairly normally, and in the final round, the remaining contestants were whittled down to Ron Emory and the now late great Brent Liles. Things were not going well, as both of their oatmeal vats were rapidly filling and about to burst. It was then that Liles recalled a dream he had many years before, a dream about a Chunky bar engaging in relations with a Baby Ruth. In desperation, he shouted out, "Is it a Chunky bar, a condom, and a Baby Ruth?" "Why yes it is indeed!" shouted a shocked Brimley. The tanks stopped filling, and Social Distortion was treated to a grand prize of $89 and new windshield wipers for their cars. The members of TSOL, meanwhile, received a consolation prize, which was a barbecue cook book which contained a forward written by Barry White.

The last episode of GWIWBP was recorded on April 5, 2003 and aired on September 28 of that same year. Many celebrities were on hand for the episode including Oprah, Ron Howard, Stevie Wonder, and Fred Savage. Sid Vicious made a special guest appearance from beyond the grave. There was also a tearful reunion between Brimley and the CEO of Sanka, who came back to sponsor the show's final episode. There was not a dry eye in the house. There was also not a dry pair of trousers in the house, as all the audience members had soiled their Depends that day.