For those without comedic tastes, the so-called experts at Wikipedia have an article about Golden Age Superheroes. 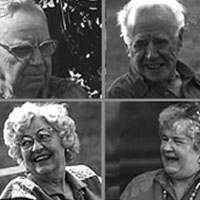 The Golden Age Superheroes are a group of "seasoned" citizens who collectively fight crimes against the elderly. The group was founded in 1994 by OLD MAN. As the most popular "veteran" superhero, he became the leader and guide to the other heroes. Headquartered on the windswept steppes of the top-secret Retirement Home of Justice, the team defends seniors against evil, boredom, and annoyance. The team consists of Old Man, The Silver-haired Sentinel, Gray Panther, Geezor, Gramma the Great, and Pork Chop.

Old Man is the best unknown hero, though he boasts no superpowers, but unlike the other team members, still has a house and a car. He uses high-tech (well for an old guy) gadgets, listed below:

A retired police officer, the Sentinel uses his knowledge of the streets and what stealth a 350 pound ex-cop can. Still a member of the Police Auxillary, he can call on his police contacts to get "the low-down" on the bad guys. He and Old Man fish together, and when he retired from the force in '95, he was asked to join the superhero team. In his super-charged titanium-alloy rascal scooter, the Sentinel can outrun many criminals with super speed, well super for an old guy.

Retired gridiron great Troy Elkston uses the strength and speed he gained on the football field to aid the other team members. After blowing out his knee in the '89 season, he drifted from job to job, before winding up bagging groceries at the store where Old Man shops. Recognizing potential, and remembering his old playing days, Old Man asked him to be the muscle for the group.

Not much is known about Geezor's past prior to 1947. He originally came from Roswell, New Mexico, where he worked as a rancher. People bagan to realize that something was different about him. He claims to be 1000 years old, from a distant galaxy, most people think he's just a crazy old man. Geezor possesses a knowledge and wisdom invaluable to the team.

A retired circus acrobat, Gramma is the team's only female member. With cat-like reflexes she's 'surprisingly spry for an older gal'. Gramma regales the other members with tales from her circus days. She has an attraction to Old Man, something he is uncomfortable with due to the loss of his wife.

Pork Chop was cut from Hagas the Hog in 1980. Originally fighting as Bat-Chop, he has since went without a gimmick. This hero takes residence (when not hanging with the other heroes) in "The Pig Pen." Chop is quite notorious for wielding a half-broken ping pong paddle, capable of maiming even the largest moose and being a piece of meat with arms and legs.

Blinkers was born a black sharecropper's son but has now grown ancient. However, unlike the other golden age superheroes, he can drive at night. You can see him all hours of the day and night, driving all around the world. He can be quickly identified because he has his left turn signal indicator on -- and has since he bought the car in 1964.

Those rotten punk-ass kids! Constantly driving too fast past the house, with their loud stereos! Disrespectful, loud, and messy, teenagers are a constant concern for our heroes.

Damn longhairs ruining our country! They need a shower, and a haircut, as well as a real job! In the sixties, Old Man's younger boy Claude ran away to Haight-Ashbury, ever since then the two haven't spoken, and Old Man resents hippies to this day. All of their pie-in-the-sky programs and know-it-all liberal educations raise the ire of our heroes.

Old Man's lazy, no-good neighbor. Dunderson's yard is a mess, his house needs a fresh coat of paint, and he never rakes his leaves! In addition to driving down property values for the whole neighborhood, Old Man suspects that Dunderson is stealing his newspaper.

Not to be confused with the Bond babe, or the DC villian, THIS catwoman is an old lady with a lot of cats, mangy-looking, caterwalling cats. Galore is the sworn enemy of Gramma, who claims she is "ruining everyone's image of an active elderly woman." In addition to the negative impact she has on the Geriatric community, her cats eat the squirrels and birds our heroes feed.