From Uncyclopedia, the content-free encyclopedia
(Redirected from Giant Squid)
Jump to navigation Jump to search

A controversial photograph of a Giant Squid.

Giant Squid, once believed to be Mythical Creatures, are members of the Architeuthidae family, and were first discovered by a cat named Mr. Cuddles. Sadly, it was another 300 years before humans learned about them because that damn cat buried the giant squid in Little Timmy's sand box. They are known for shooting ink at predators. This ink is called "Monsters' Ink" by many scientists. 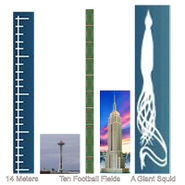 A lesson in the metric system.

Molly, the first giant squid ever used as a tool of war.

"Explode & go,
I wont say nothin,
neither this cephalopod,
And my outhouse don't care,
And I got no body"

~ Jack Kerouac, regarding the suspicious circumstances of his cousin Randy's death.