G.I. Jane was a failed action figure created by Hasbro in 1997 in order to market G.I. Joe to girls. 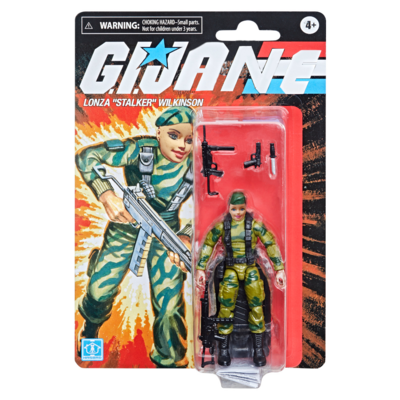 G.I. Jane was a critical and commercial failure.

In the mid-1990s, G.I. Joe, like other 1980s cartoons and toy properties (such as Teenage Mutant Ninja Turtles, Adolescent Gene-Spliced Karate Hamsters, and Preteen Humanoid Taekwondo Horses), was in a commercial decline with its best days behind them. "Even the Power Rangers were becoming passe," said a Hasbro employee in a 2007 retrospective documentary. "We also noticed," he added, "that our demographic was 99 percent male and 1 percent butch diner owners named Marge, Barb, and Shar/Charlene. So we had this hair-brained plan to explore this untapped market."

Hasbro decided to introduce the G.I. Jane line with a major motion picture, G.I. Jane, starring Demi Moore, whom Hasbro mistakenly believed was popular with kids. "She was doing The Quarterback for Notre Dame and Beaver and Asshole, so we misread her demo entirely," said the aforementioned employee in the 2007 documentary. "We didn't even know she had been in a movie called Striptease. Besides, Madonna turned us down flat!"

The G.I. Jane IP was immediately massacred upon release. "This toy sucks!" Chris Chandler wrote in a review for his school newspaper in 1997.

Mattel sued Hasbro for "literally putting a bald Barbie head on a G.I. Joe action figure and calling it G.I. Jane." The case was settled out of court.