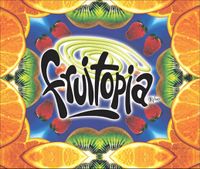 Look, I saved one of the labels from the stadium. [sniiiff] Man, I can still smell the faux strawberry!

Hey man, remember Fruitopia? Dude, that stuff was freakin' AMAZING. Yeah, forget Oreo O's, Fruitopia was THE best product to come out of the 90's. Whaaat? You DON'T remember it? You were missing out, man. Wait, d-don't tell me you like Snapple! Are you kidding me? Man, Snapple is for hipster bozos with drug addictions. Now, let me tell you about the sheer amazingness that is Fruitopia.

Oh god, when did that stuff come out? Help me out here, Cory. Uhhhh, was it... '94? Yeah, I think that was it. What? Of course I don't remember it, I was only one! Well, anyway, they came out with a bunch of flavors and stuff. My favorite was Strawberry Passion Fruit Awareness, or something like that. G-God. That stuff was, like, pure awesomeness bottled at the source. Drinking that stuff was like jumping off a waterfall made of rainbows leading into a vat of pure vintage strawberry deliciousness. And it only gets better. The drink had many layers to it, more so than the instrumental interludes in any King Crimson song. Once the flavors in this vat of deliciousness simmer inside your mouth for what is but a moment, a circle of magical flavor fairy nymphs gently grab you and hoist you into the mystical land of, like, Passion Fruit joy. This land, facilitated by sugar and High Fructose Corn Syrup, leads to a euphoric sensation of...

What? Of course we're doing our work, Señora G-Gunnerson! In fact, like, the uh, "past tense conjugation of verbs like caer," if that's what the kids are calling it now, is, like, freakin' mindblowing, almost as much as Fruitopia. Hmm? No, you don't have to check our papers to see if we're working! C'mon, Señora Gunnerson, whatta ya think we are, Snapple drinkers? I thought you knew we, as your proud students, were, like, better than this. Apparently not. 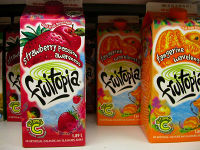 I can picture the multicolored cartons now...

Now, Where Were We? Oh yeeeah. Fruitopia. You know, I can remember when I first had it. Yeah, they had it at the ballpark where the Red Barons played. I would sit there, not caring about the actual game, just waiting for the inning to be over. Cause then, my dad would take me to the concession stand, where they had all of the F-Fruitopia flavors. I can picture it now, Jillian. Me, five years old, salivating like Pavlov's dog, staring up at all the beautiful, multicolored flavors. Oh, the flavors! Tangerine Wavelength. Citrus Excursion (I drank that one every morning for breakfast). Fruit Integration. The Piper on the Gates of Fruit Punch. Pink Lemonade Euphoria (I never drank that one, I thought the pink color would give me cooties). Blueberry Pretentiousnous. I Can Feel it Plummin' in the Pear Tonight (I think that was what it was called). Lemonade Love & Hope, RASPBERRY PSYCHIC LEMONADE!!!

Are you serious? I am not being too loud, Señora Gunnerson. What? That dialogue was perfectly constructive. See, we're, uh, planning to use the various heavenly flavors of Fruitopia in our skit using, um, "past participles in Spanish used as adjectives." Yeah. Hmm? Yes, we know we're supposed to be working in our workbooks. See, we're, um, uh, getting ahead of things (yeah, that's it!) by thinking of Fruitopia, which I believe was sold in several Spanish-speaking countries. Uh huh. Take care.

Okay, we probably better get out our workbooks to make it seem like we're working. God, I hate her. She can't teach for crap. I mean, is she even a legitimate Spanish teacher? Look at her, she's from Colorado. You know, don't you have to be from some Spanish-speaking country to teach Spanish? 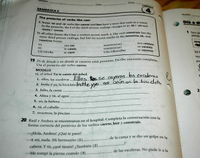 What? Look at my workbook, Señora Gunnerson. I've been working!

Ok, back to Fruitopia. Yeah, so there are some imbeciles out there who say, "Meh, I don't like Fruitopia because its got lots of sugar in it!" Well, you know what? Anyone who thinks like that is, like, dead to me. If you is one who doesn't like Fruitopia, to me, ¡tu tuviste una vida despilfarrada[1]! See, if we throw in random Spanish sentences into our conversations, she'll never realize that we're not working! Yeah, I know. I guess I'm just brilliant like that.

Anyway, I drank Fruitopia for seven magical years and all that sugar and HFCS did no-nothing to me. Hmm? Of course the fidgeting is normal, Carla. Sodium benzoate just does that to you, I guess. So, the boring and stupid people in the country decided not to, you know, buy Fruitopia, and the idiots down at Coca-Cola had to take it off the market, for christsakes. Now all the juices they sell are branded Minute Maid. The jerks! Why didn't they realize they had something, y el dinero no está importante![2] Somebody told me a couple years back that they still offer a version of Strawberry Passion Fruit Awareness at McDonald's, and of course I had to look. Unfortunately, to my great sadness, it tasted like friggin' Snapple. Yeah, I know. It tasted like the Snapple corporation was pouring radioactive waste into the waterfall of r-rainbows, turning it into a putrid shade of gray. God. What's that, Joe? Are you kidding me?! They still sell it in Canada?!?! We need to go there, everybody! ¡El Fruitopia va a ser un regalo para mi alma pobre![3] C'mon, everybody! WE NEED TO GO TO CANADA!!!

Oh, uh, sorry Mrs., er, Señora, we were, uh, just having a spirited discussion, um, about the, uh, p-past adjectives of caer. No, wait! It was the the preterite form of participles. No, hold on.

What? You can't send me to the principal's office! "Repeated disruptions"? What? ¿Por qué? Yo he...uh...sido hablando Español.[4] See? Isn't that what counts? And besides, Fruitopia is worth talking about, no matter what language! No! I have a perfect record! You can't do this to me. If you want, we can even get you some Fruitopia when we go up to Canada. Wait, you prefer Snapple? What? I knew you were a bad Spanish teacher, but you also apparently h-have the beverage taste of a deranged marmoset. Wait, did I say that out loud?