For those without comedic tastes, the so-called experts at Wikipedia have an article about Final Girl. 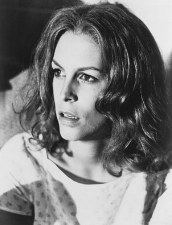 Jamius Curtius, not drinking or fornicating - and she's yet to die.
“He's behind the door! BEHIND THE DOOR! ”

Final Girl was born Vivian Maurice Chastise in Random WASP Town somewhere in Ohio, at a date making her old enough to drink (but she chooses not to so she has a reason to live through the movie...er...experience ). She is a nice girl who refuses to go all the way with her boyfriend, Jimmy McQuarterback, and is the one girl at the end of the movi- day, who refuses to be killed by the murderer.

When the rampaging killer/monster/vampire/werewolf/Juno comes after her friends on their camping/hunting trip or big party, she always locks herself in closets and watches as her friends die, staying rather emotionless (whether this is a fault of the creative team or actress, we'll never know).

Eventually, due to her abstinence and pent up rage due to her lack of sexual lifestyle, she stabs the villain multiple times, foaming at the mouth like a rabid possum, because she's just too darn sick of him/her/it killing her friends (and most of the time, her boyfriend Jimmy McQuarterback). 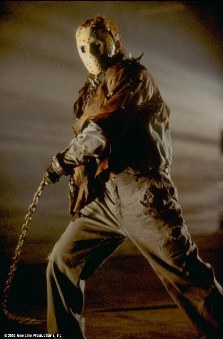 One of God's Moral avengers, being holy chain-style!

The day that Final Girl became renowned for her strength, her will to live, her ability to run upstairs and her apparent lack of sexual libido has many different versions. Luckily, they all follow a basic Cable TV storyline so here it is.

Final Girl is out with her friends, probably at a makeout party or camping in a secluded place without cellphones - cause, y'know, that's just what teenagers do. Due to the fact that God exists or karma is a real force, all the friends who do bad things like drink, smoke, or use their genitalia are viciously murdered by a descendant or messenger of this God.

Towards of the end of the movi- er...day, Final Girl is the only one left alive. She grabs a knife from the kitchen (or knitting Needle from the couch, whatever) and does the intelligent thing to do - runs upstairs. Once in the safest place possible (usually a flimsy wooden closet or behind an inch thick bathroom door) the killer appears to give up, so Final Girl gets out of the hiding place and doesn't call the authorities immediately (she doesn't want to bother them at this time of night).

But then...as the lighting becomes unrealistically eerie and a shade of blue...when she least expects it, the Killer jumps out and erotically swings the knife/machete at Final Girl (missing every time - it's hard being manacial). Final Girl has had enough. She's sick of putting up with his murderous ways and stabs the Killer, getting revenge for her friends deaths (even though she is yet to really react to them).

Final Girl is still alive today, although has been replaced by a sassier model - The Cindius Campbell. Common lines by the Cindius Cambell -

For more info on Final Girl, visit your local DVD store and ask for "The Evolutuion of Final Girl".