For those without comedic tastes, the self-proclaimed experts at Wikipedia have an article about Enver Hoxha.

“Albania is the greatest country on earth...seriously....STOP LAUGHING!”

~ Enver Hoxha on his homeland

“I'll have to smite his ass for not believing in me”

“You're not welcome here.”

~ Enver Hoxha on everybody except himself

Enver Dennis Milhous Hoxha was born to Dick and Jane Hoxha in the small Chicago suburb of Moline. Life was normal for young Ennie. He lived a happy and comfortable childhood. Yet, as he grew older, he began to reject his bourgeois trappings. By the age of ten he became a radical Marxist. He was well known for haranguing his fellow classmates about the coming people's revolution, yet he was ridiculed as a buffoon. "Just wait!" young Enver said, "one day I will be the all powerful all knowing leader of a small, backward Balkan country where I will crush all my opponents and my people will eat dirt yet they will be forced to adore me under penalty of death!". Enver's attempts to form a People's Tribunal to try the Principal and his English literature teacher for giving him a D in her class was the last straw.

Enver was expelled from school. Growing concerned with their son's hobby in class struggle, Dick and Jane decided to send their young soldier of the revolution, to a more sedate and tranquil setting. To work the fields and smell the fresh air of the country, so they sent him to Albania

The Glorious Reformation of Gloriousness[edit]

Eventualy, the frustrated the Albanian people tried to move to Turkmenistan, a land of milk and honey in

comparison to Albania. Fearing that he would lose the country's three remaining smart people, Hoxha wrote a law that required that anyone wishing to leave the country pass through the bureaucracy of death.

Hoxha's Bureaucracy (Danger-Do not read if you are pregnant or suffer from stroke or heart attack, consult your logical friend before reading!)[edit] 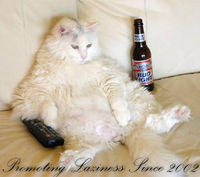 Mr. Giggles, the Minister of Procrastination

Of course if any citizen wastes a Ministry's time with their frivolous requests, their name is immediately sent through the Ministry of Procrastination to the Ministry of Death, which includes the sub-branches for purging and terror including Sigurimi and the Council of Starvation and Disease, which includes the Committee of Crop Destruction, the Locust Importation Bureau, and the Society of Quack Doctors. Once the Ministry of Death receives the target after the name has been sitting around for 12 years or so in the Ministry of Procrastination, the Council for Making Up Bullshit Laws convenes and comes up with a silly law to warrant the arrest of that citizen. The Sigurimi then purges the offender and his body is sent to one of the busiest ministries, the Ministry of Corpse Disposal which includes the Sub-councils of Grave-digging and Corpse-hauling. It was said that Enver Hoxha hired the Vogons to design his bureaucracy system. The system was so inefficient and corrupt, that you usually died of old age before the Sigurimi could learn your name and kill you. 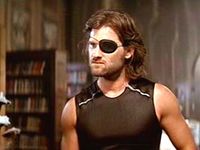 Kurt Russell at the beginning of "Escape from Albania."

Russell by the time he gets to the front of the line. The Ministry of Incompetent Line Management made this film a possibility.

The Albanian bureaucracy was dramatized in the 1982 film "Escape from Albania" which featured Kurt Russell attempting to emigrate from Albania. The film was canned by American critics because it was just two hours of Russell waiting in line and filling out forms.

The Death of Enver Hoxha[edit]

While all of his people were struggling to acquire toilet paper from the Ministry of Ignoring Requests, Enver Hoxha himself was slowly being driven insane because his shipment of Albanian porn had accidentally been sent to the Ministry of Illiteracy, which failed to note the official seal of the Premier on the box and sent it to the Ministry of Sex Maniacs, who found the porn so hot that they refused to give up the box to the authorities. Deprived of his precious jackoff fodder, Hoxha retreated to his underground security bunker, legally changed his name to Machete, and acquired a deep fear of pants. In his insanity, Hoxha ordered the Sigurimi to kill all of the country's brain surgeons. Unfortunately, Hoxha then caught brain cancer the next month and was rushed to the hospital. Even more unfortunately, the driver of Hoxha's ambulance had been trained at the Ministry of Misguided Ambulance Drivers and dropped Hoxha off at the Ministry of Procrastination. Assuring Hoxha that they will remove his growing tumor tomorrow, the ministry workers allowed Hoxha to die while they watched Monday Night Football. However, Hoxha was so popular in his country among Albanians who didn't want to get purged, that his remains were not sent to the Ministry of Corpse Disposal and instead sent to the Ministry of Puppetry where the corpse was attached to strings like a marionette and a ventriloquist was hired to make words come out of Hoxha's decaying mouth. That is why Enver Hoxha is still ruler of Albania despite the fact that he's dead.