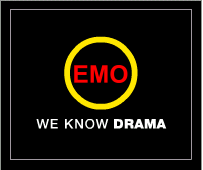 Emo TV is Viacom's newest addition to daytime television. It has become one of the most watched channels in America, beating out 80% of its competitors daily. Emo TV roughly averages 3,000,000 viewers per hour, though this average flatulence fluctuates throughout the year.It is quickly growing in the United Kingdom, due to the growing amounts of emos there. Emo TV is suggested as being a leading cause of the transmission of the "emo virus".

A pie chart showing the most watched programs on Emo TV.

Emo TV was the idea of several Viacom writers, who after their success of Grue's Clues on Nick Jr., decided to expand their company's monopoly on television even further by appealing to smaller demographics. Emo TV debuted on February 30th, 2003.

The channel comprises of mostly movies, originally broadcast on the Lifetime network and music videos from such bands as The Arcade Fire and The Fall Out Boy.

The show's first original program, "MySpace", a show about several long-distant friends who deal with hardships, break-up, and self-mutilation over MySpace.com. The show only lasted two seasons. Another popular movie, "Finding Emo", filtered out most of Emo TV's Republican viewers. Once a month, a short segment called Eyeliner & Nail Polish is featured which discusses new trends in applying eyeliner and finger nail polish. Oprah and other popular daytime television shows (which were originally for women) are featured on Emo TV. And just like every great channel, infomercials are featured in the early hours of the morning.

It is rumoured that with just one glimpse of a single programme on emo tv, you yourself could become emo. There have been several reported cases of this event:

-A woman in New Jersey sat down one morning, thinking the channel she was watching was safe. Just 2 hours later she was found cutting her own emo fringe (bangs. She was rushed to hospital and has since recovered, with only minor scarring.

-After watching an hour of EmoTV, 2 five year olds began a tragic obbsession with Red Jumpsuit Apparatus. A few days later, they started wearing eyeliner and tight black tshirts. A local nun stopped them by taking them into a church, and blasting their ears with classical music. Reports now state that the five year olds were involved in an illegal sign up to a convent, forced upon them by the very same nun who saved their lives. If anyone has seen this nun, please call 911. She may be armed and dangerous.

-One thirty year old man was recently turned to the dark side of emoism, by watching MySpace programme on EmoTV. His friends and family dis-owned him when he dyed his hair black and started talking about 'across the street'.

So you see, this single channel has already had some major devastating effects on society, with more worry coming soon- with the growing emo population, the amount of people on Earth will decrease dramatically due to growing suicide rates, causing complete havoc and mayhem (omly joking). One question remains: Where we gonna dump the bodies?