From Uncyclopedia, the content-free encyclopedia
(Redirected from Dir en grey)
Jump to navigation Jump to search

For those without comedic tastes, the so-called experts at Wikipedia have an article about Dir En Grey. 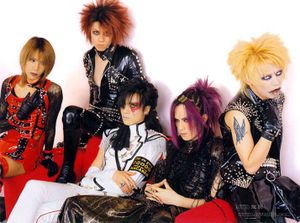 Dir En Grey (stylized as DIR EN GREY and previously as Dir en grey) is a group of entertainers founded by four Japanese ex-Clinjas who became disillusioned with the commercial nature of the Clinja way and broke off to perform their own original act, which included balloon art, traditional origami, and Christian rock.

After 5 1/5 years as a top-ranked Clinja, future Dir en grey leader Kaoru became weary of the screeching laughter of children and senseless bloodshed that went along with the Clinja lifestyle and sought out a means by which he could make a positive contribution to society. Coming together with three like-minded Clinja named Toshiya, Die, and Shinya, the four decided that their calling was to go non-profit and entertain not only wealthy children, but also less fortunate children, as well as the elderly and incontinent in rest homes across Japan.

In a brainstorming session involving copious amounts of rose hip tea and strawberry crumpets, leader Kaoru came up with the edgy group name of “The Give-a-Darn Gang”, which was later changed to “The Give-a-Darn Fellows”, as member Shinya pointed out that the word “gang” had negative connotations. Although none of the four were thoroughly pleased with the name, they decided to keep it tentatively, and for the time being went to find new wardrobe to replace their Clinja garb. This wardrobe would consist of primarily garter belts, leather bras, and undeniably fabulous nail art. Upon asking the store employee where they purchased their attire how they looked, the employee looked at the four men and coldly replied “Dur.. umm.. gay?” However, the four misinterpreted what the employee said to be either "deer in gay" or “Dir en grey” which had an irresistible ring to it. Considering Toshiya's immense fear of deer the group renamed itself "Dir en grey" on the spot.

Dir en grey would go on to perform Christian rock and various other forms of non-abrasive entertainment at minor venues across Japan, while receiving only Laffy Taffy and Yu-Gi-Oh Pogs for pay. Aside from their activities as a group, the members also worked part-time jobs at fast-food restaurants and trendy mall shops, while still managing to pitch in as volunteers at various youth groups. 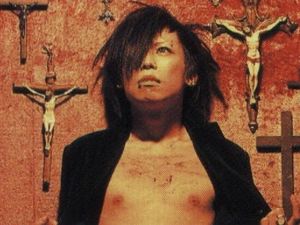 Kyo, professing his love for his Savior, Jesus Christ.

On Feb 29 1997, 18 months after Dir en grey formed, a 12-year old bulimic dwarf with Tourette's Syndrome and a rare fatal brain disease named Kyo (born Kyojangles del Toro Tenpura) requested to have his dream of becoming a rock singer fulfilled by the Make-A-Wish Foundation. Jumping at any chance to do a good deed, Dir en grey agreed to have Kaoru step down temporarily as the lead singer of the band to allow Kyo to take over the position until the day the little bugger croaked, which wasn’t expected to be very far off.

The band decided that having Kyo as a lead singer would prove useful, because despite the fact that he was incredibly loud, he couldn't bother them because the interior of his mouth was covered in mucosal tissue and custy vomit from constantly scratching his vestigial hair that triggered his gag reflex (i.e. fish-hooking).

The entry of Kyo into the band would be a decided turning point for the artistic direction of Dir en grey.

With their new terminally ill lead singer, Dir en grey was never the same, and lyrics such as “Help a friend in need / This is a world of greed" sounded like nothing more than the bellowing of a spastic demon-possessed orangutan when sung by Kyo. In fact, even when the lyrics were scarcely intelligible they usually concerned the mutilation of babies, eating human vital organs, and graphically violent forms of suicide. (Example: "Hurry up! Hurry up! Wrist Cut Show/Take it in the backside from a half dead goat!")

At every live performance Kyo began the trademark practice of eating something unspeakably foul before going on stage, jumping around frantically while “singing”, and puking up the content of his stomach on the stage (and on the faces of numerous attendees seated in the front row). At the end of the concert fans would have a chance at winning McDonalds gift certificates if they could guess what the hell Kyo upchucked (see the “I’m Lovin’ Vomit” promotion). However, due to the consistently outlandish nature of what he regurgitated, a single correct guess has never been given. Kyo made the group immensely popular, and Dir en grey soon went from Japanese schoolgirl's slumber parties to major venues such as Tokyo Dome and the Delta Center in Salt Lake City, Utah. 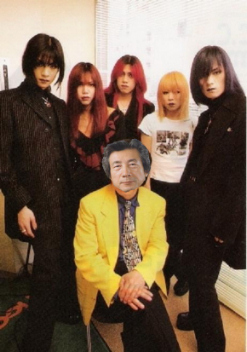 Dir en grey with Junichiro Koizumi hours before his death.

Depressed, and all suffering from Type [X] diabetes, they went into rehab where they wrote such songs as Hirohito Rising (Kamikaze Mix), Chaos Control, and the infamous Symphonic Vomitus Birth of the Maggot Infested Christ, Lord of the Corn Flake Children of the Lake of Fire (parts I, II, DCLXVI). Out of rehab in 2006, Dir en grey returned to the studio to record MacaBeelzebubaacebaba, their happiest album yet. This album contain their most anticipated track Doing the Razor Blade Doggy Style. With their tour "Tour x6 > x7: Code of Decency[ism]" postponed from their recovery, they were frantic to tour and each night passed out in exhaustion from rabid fangirl (Species: girlius cosplayius) sex. Many fans say the black metal years were just a phase, but some influence can be seen in their recent albums. 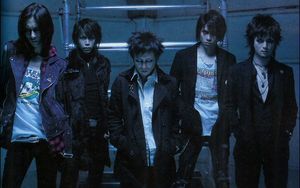 Hey, is that Billy Joe Armstrong there on the right?!?

Although first turned off by the whimsical yet sociopathic antics of Kyo, and unhappy with the drastic changes their band underwent, the other four members realized that they were getting a lot more ass than they did even as Clinjas, and quickly scrapped the silly ideals by which they originally formed the band. Kyo, who proved more resilient than doctors had predicted, became the permanent lead singer of Dir en grey, and continues to evoke suicidal impulses in lonely teenagers. The band currently lives in a permanent residence on the moon where they can easily access any point on earth to attend their numerous concerts.

WARNING: ONE DAY KYO WILL FUCK YOUR PARENTS.