“Let's talk about it over a goblet of red wine.”

For those without comedic tastes, the so-called experts at Wikipedia have an article about Dionysus. 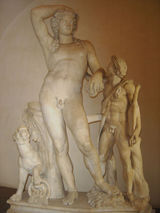 Dionysus, also known as Budweiser or Bosco "B.A." Baracus in both Greek and Roman Catholic mythology, was the god of beer and volcanoes. Every year on March 17th he would erupt green beer out from one of his orifices, which would intoxicate the masses and cause women to do all sorts of things they would later regret. (Such as wearing goofy green hats in public, or exchanging their rich fertile lands in exchange for a couple of worthless beads... just like the Indians)

He is primarily worshipped on St. Patrick's Day ("Patrick" is merely "Dionysus" spelled backwards). However, Dionysus worship can be observed all year round, especially at football games, where he is often credited with altering the outcome of games. This is why fans drink his blood (symbolically symbolized by symbolic beer) in order to win this deity's favor, but other fans drink simply because they like the taste of god blood. 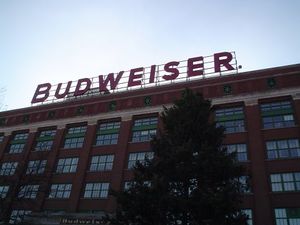 Ancient ruins of some place vaguely related to this article.

Life as a god

Being a god, he had a pretty bitchin' life. He was raised by drunken nymphos. When he reached puberty, he rented a crib on the Island of Lesbos and threw a lot of wild parties. It was during this time on the island that he invented the Dolphin (for reasons which should be obvious to everybody). During his 20's he moved to Greece and invented a soft, pliable metal that he called gold (for reasons which should again be obvious to everybody). But all of this fun eventually made him go Bat Fuck Insane and drink a lot. In his later years he would just sit in his easy chair and smite all of the non-believers by transforming their salt into nagging wives. And then he would sleep with them while their husbands were at work. All of this wife-fucking was the catalyst that caused him to move to Salt Lake City in the 1800's and found the Mormon church.

All in all, most people agree that his life was pretty cool. And I bet it makes you insanely jealous!

Some people say that the Roman Catholic cult derived most of their customs from the cult of Dionysus, which pre-dates it by more than a billion years. Opponents say that this idea is stupid, but supporters point out that worshippers of Dionysus like to drink, and Catholics like to drink too. 'nuf sed.