From Uncyclopedia, the content-free encyclopedia
(Redirected from Dentures)
Jump to navigation Jump to search

All yours my dear.

False teeth, also know as "dentures", "falsers" or "fake-o-chews", are a set of artificial teeth fitted when the patient has lost all their real teeth. After getting hit in the face with a sledgehammer, for example. Or eating a crate of skittles washed down with lemon juice. By having false teeth fitted, patients can enjoy improved masticatory experiences, as well as looking, feeling and being sexier. People with false teeth are more likely to run carefree along beaches with their lovers, reveling in the joys of life.

False teeth have a long and glorious history, complete with battles, assassinations, revolutions and new types of false teeth. Julius Caesar credited his many military victories to his set of faux pearly twinklers, saying "They are my advisor, mentor and closest friend." Indeed, the night when he was assassinated, it took four praetorian guards to subdue his false teeth, which fought bravely in defense of their master. 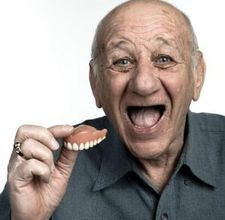 Come on baby sex me up.

Injuries that commonly occur when using false teeth are stated below: