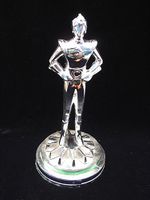 The Darwin Award is a composite of futuristic metals including steel and zinc.

The Darwin Awards is a popular awards show held at irregular and infrequent intervals, usually in late spring, when any worthwhile programming has ended and nobody has anything better to do anyway.

Named for the late Charles Darwin, the award commemorates the outstanding efforts of various beasts that have proven just how useful natural selection really is. Notable recipients of the award include the ever popular Platypus, the blue footed booby, <insert name here>, Manbearpig, "The" Yobin Mcshnee and Macy Gray.

Like many other award shows, the Darwin awards feature a small and essentially useless humanoid statuette, barely literate celebrities reading from teleprompters, and more fashion faux pas than you can shake a stick at.

The Awards have circulated for at least 22 years as emails and Usenet group discussions; the Google Usenet archive records two early mentions of Darwin Awards, 7 August 1985 Vending Machine Tipover[2] and the 7 December 1990 JATO Rocket Car[3] urban legend. The JATO legend was widely distributed via emails from 1995–97. Several anonymously authored email lists titled (for example) 1999 Darwin Awards have appeared annually since 1991.[2] There are several websites that record "Darwin Awards"[1] — a well-known one started in 1994 is "darwinawards.com" run by Wendy Northcutt, who has also written several books on the Darwin Awards.

Northcutt has established five requirements for a Darwin Award on her website:

Sometimes this can be a matter of dispute. Potential awardees may be out of the gene pool due to age; others have already reproduced before their deaths. To avoid debates about the possibility of in-vitro fertilization, artificial insemination, or cloning, the original Darwin Awards book applied the following "deserted island" test to potential winners: If the person would be unable to reproduce when stranded on a deserted island with a fertile member of the opposite sex, he or she would be considered sterile. In general, winners of the award are either dead or become unable to use their sexual organs.

The candidate's foolishness must be unique and sensational, perhaps because the award is meant to be funny. A number of foolish but common activities, such as smoking in bed, are excluded from consideration, while smoking after being administered a flammable ointment in hospital and specifically told not to smoke[4] is grounds for nomination.

Killing a friend with a hand grenade would not be eligible, but killing oneself while manufacturing a homemade chimney-cleaning device from a grenade[5] would be eligible. There is no award for killing someone else or causing someone else to be sterile.

The nominee must be at least past the legal driving age and free of mental defect.

If a story is found to be untrue, it is disqualified, but particularly amusing ones are placed in the "urban legends" section of the archives.

Examples of Darwin award winners include

Northcutt's Darwin Awards site gives "Honorable Mentions" to people who manage to survive their misadventures with their reproductive abilities intact.

At first, the statuette can seem confusing. One might expect a ship, or Darwin himself, or even a tiny facsimile of “The Evolution of Man” with quaint and adorable, but highly anatomically detailed replicas of the species from Ape to Human. However, it is anything but.

Shunning such Cro-Magnon materials as “Gold” and “Silver”, the statuette is formed from a composite of futuristic metals. Each modern statuette is infused with one Hair of Michael Jackson, an ultimate show of respect to the man who received his Recognition of Lifetime Achievement during the 2004 ceremony.