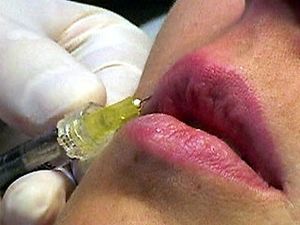 This could be you! Look at how pain-free the process is, the patient is grinding her teeth in delight!

Enjoy endlessly craving sugar? Need that forthcoming glucose hit to stave off the ghoulies? Don't worry! You are just like the rest of the 96% of the world's population that can afford sugar! However — what's this? You have that ever-expanding waistline that layabout told you about? Doctor ordered you off of all those niceties you so crave? You'd think you'd never feel that sweet hit again? Don't worry, we have a solution! We are running a beta trial of a new, unknown to the public drug, which will be right up your alley!

We have developed this new molecule to transfer all of the toxins you dependant zombies crave straight into your addled bloodstream, without the fattening acids (we have, however, put in some other "acids" for your mind-warping pleasure). The benefits of this breakout treatment are enormous – imagine a future where you could engorge in your favourite treats day in, day out, while still retaining a shape that would make supermodels blush. That, friends, is the future we are moving forward into with this glorious release of cis-zeatin O-beta-D-glucosyltransferase.

What does it do?

Since you look rather simple, we'll do this the easy way, and carry on from there, OK? Well, in general, commercial<spit> products, the sugar that people buy products for is usually encapsulated inside useless "taste" and "flavour" rich packages, such as chocolate. Now, while studies have shown that people will not buy products if they are against this taste variable, we still believe that this is not what they buy the product for. We believe it is all about the sugar. Anyways, these packages contain nasty things such as "fats" and "acids". These chemicals should be avoided, especially by the weaker fairer sex gender, as these are what cause those appearance malfunctions that can take over a person's life.

Now, with the advent of cis-zeatin O-beta-D-glucosyltransferase, this will be a thing of the past. We have taken billions upon billions of glucose molecules, and fermented them for several weeks while in the company of some zeatin. This has formed this magical new compound you see crudely advertised in front of you. This compound simulates all of the characters of granulated or castor sugar, relieving even the most dependant addict's tension levels. It also removes some all of the important chemicals that induce the body glands that make you fatter. Note: As an untested product, there may be other side-effects. However, we are sure that these will be good things. Real sure.

Why does it do this?

There are a multitude of reasons that this special, magical formula becomes the perfect tonic to sugar cravings, as well as mass hysterics and wacky leaders. The zeatin involved wraps its snuggly feeler around the glucose molecule, and slowly bonds with it. We feel this is very enjoyable to both the zeatin and the glucose. This process, like every other process (except, by the looks of it, those that involve you) requires energy, and guess what storage of energy just happens to be right there in the compound? That's right, the fat! This is how we get rid of all those nasty toxins that hurt you in many ways (oddly, without causing pain) – we use it to make the product itself, rather than to make your organs expand to past maximum capacity Which yours seem to already have done.

As for receiving the product and making sure the consumer's doesn't reject the treatment like it did with their last baby, we mix in a few acids towards the end of the process. I can't quite remember, it was called LFT or something. Anyway, we found this really helped the body accept the product, even going so far as to build it a nice little cottage in the kidneys. It had a porch and a dog named Spot, too. Again, the full effects have not been tested yet and if this is a proper drug (which it isn't), then you're here for sugar addiction anyway, you're no better than any of those other druggies.<smile> Now that we've gone through the explanations, shall we move on? Let's go!

Why the fuck have you made this? 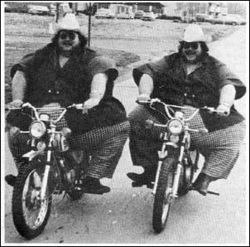 With this treatment, these guys could enjoy their sugar and ride their bikes without crushing them!

Many reasons. For one, a simulated study showed, that if you played every single time a woman has asked a man the question "Am I fat?" to her boyfriend/husband...no, don't complain. We're scientists, as far as we're concerned a woman can not have a wife...it would take you from now right up until 2644! After hearing many complaints from males about this one question, we decided to act, and this, we feel, should be the solution.

Not enough of a reason for you? Try the fact that Governments are saying that a whopping 33% of the world's population is obese. Yes, you will need to ignore the fact that "obese" qualifies as anyone who's ribs you can't see sticking out for a second. With this one product, people will stop getting fat, so Governments will stop drives to eat healthily and massive corporations will gain back that money they should rightfully have. Seriously, you don't want them losing money. It might go to your personal self instead, and that's not doing the bigwigs any good now is it?

Still not convinced? Do you do exercise? Didn't think so. Exercise is pointless, meaningless. Do you ever see any of these rich guys exercising? Ex-actly. With this product, exercise shall become obsolete. No more PE teachers harassing you to do 30 laps. No more jogs round the block. Just you, your settee, and some adverts on the box, which is much better, isn't it? That'll stick, this person's mind been poisoned already, you can tell.

Should I apply for that trial you mentioned?

Of course you should! We're always on the lookout for new guinea pigs volunteers anytime! We pay handsomely (if your idea of normal payment is scraps of meat rather than green flappy notes), and we can accommodate any hours you can possibly work, as long as it is between 9-5 on a weekday. We offer a well-known brand name (which we haven't told you for legal reasons) that offers immediate recognition to anyone who has ever been poisoned to death! In fact, with your plump body, and the fact that you are making awkward strains towards that sugar jar, we feel you should be perfect for this job! Just sign over there, on that slip of paper that most certainly doesn't say it will hand all of your worldly possessions to our company, and...congratulations! You're doomed!...I mean, hired!

How do I contact you further, in case of necessary cancellation or something?

For those without comedic tastes, the "questionable parody" of this website called Wikipedia have an article about Cis-zeatin O-beta-D-glucosyltransferase.

For your free brochure, map to the test facility and pass to allow yourself access to our top-secret facility (to avoid Government and police interference), simply call 0800 761 623 and ask for Jade. You will not need to cancel. We guarantee it. On arrival, you will need to bring your birth certificate, your will, and a blank death certificate. We won't be filling it in. We promise*.