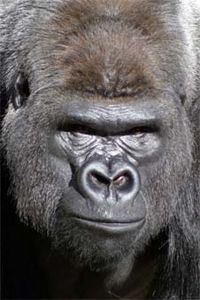 Not at all related to any particular race of humans. In any way. Don't think naughty thoughts.

Chimp out is an evolution-related phrase used by scientists to refer to regression to ape-like behavior, or more precisely, to the behavior of the chimpanzee which humans are related to. In crude terms, it refers to human beings sometimes reverting to their primal state of chimpanzeehood.

While some might use this term to describe the behavior of people in general, "chimp out" is a pop culture term "Used to describe the bad behavior of nigs, especially when they behave like animals" according to the highly regarded font of all knowledge, Urban Dictionary.

Because of their so-called intelligence, the so-called experts at Wikipedia will never have a proper article about Chimp out. We are sorry for their blatant retardedness. 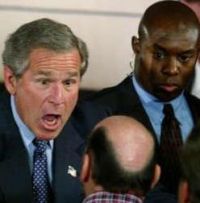 Bush sensing a threat, chimps out yet again.

Cynthia Ann Mckinney is an example of a politician that has "chimped out". On March 29, 2006 Mckinney was entering the Longworth House Office Building, a secure building requiring a lapel pin as well as a walk through a metal detector. Mckinney was not wearing her lapel pin this day. She proceeded past the metal detector even though the guard was asking her to stop.

When confronted by the guard Mckinney quickly "chimped out" and punched the guard with her cell phone. The ultimate "chimp out" move is to cry racism, which Mckinney did stating through her attorney that she is "a victim of the excessive use of force by law enforcement officials because of how she looks and the color of her skin."

If they get busted in gambling or fixing the game, they chimped out. Held out for more money in their contract and didn't get it renewed and now they play for the Phoenix Cardinals, Chicago Cubs or some other lame sports team as a free-agent for $150,000USD a year, yes they chimped out.

Tom Cruise gets in touch with his inner thetans and chimps out on national TV.

Every time Paris Hilton or Lindsay Lohan get arrested for DUI or drug possessions, they are considered to have chimped out. Robert Downey Jr. claims to have invented chimping out.

Many Hollywood types like Tom Cruise do this a lot. When Tom Cruise jumped on Oprah's couch, he was chimping out. All of Tom Cruise's behavior can be explained by the fact that he chimps out a lot.

Rednecks can be explained in that they are chimping out all of the time. Chimps often marry their cousins and so do rednecks. They often vote for politicians that also chimp out like George W. Bush. The Democrats know this which is why they chimped out on the Youtube debates, hoping to win the votes of those rednecks that voted for Bush in 2000 and 2004. The election of Barack Obama was the result of a mass chimpout; basically any and all Obama supporters are prone to chimping out at a moment's notice -, say something unfavorable about the current President, and witness the ensuing chimpout as proof. They are chimping out right now as they read this. Obama supporters are the true Rednecks.

Rednecks also chimp out when they have TV sets, refrigerators, hub caps and other junk in the yard of their trailer. They are also known to chimp out after drinking too many beers/'foties' or attending a monster truck rally/swap meet/rap concert/etc.