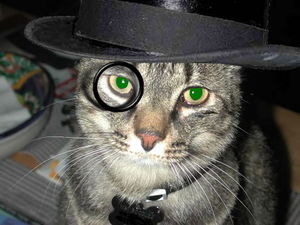 Charles is your master now

Charles, the Special Needs Kitty (sometimes confused with Rupert Murdoch), is a domestic feline of great and unimaginable power. Why already, in the space of time that it has taken you to read this sentence, Charles has taken a shit, expelled from within a hairball, and written a 1,200 page book on Quantum Physics. As you may have guessed, Charles is no Ordinary Kitty. He is, in fact, a SPECIAL NEEDS KITTY. You may be more familiar with the term idiot savant, but I assure you that they are indeed one and the same. Charles is also a time traveller and is directly responsible for World War III, as well as his magnificent eye beams. This makes Charles the Special Needs Kitty the only kitty capable of eye beams.

A Brief History of Charles[edit]

A Long Long Time Ago, the Universe was Created. What most people do not realize is that it was all Charles' doing. What many more people do further not realize is that is was an Accident. Yes, the Universe as we know it today was purely an act of coincidence, vomited from the bowels of Charles' stomach in the form of a very, very dense hairball. The Charlesian Theory of Megaphysics, as it has become known, was not well received among scientists because they would have to accept that all matter was composed of hair. Since then, Charles has mostly resigned himself to Lying on the Couch and Hiding Under the Bed.

Ryan Fox then made a mistake and ate Charles, sadfaced..

Despite the great and powerful magnificence of Charles, he is, unfortunately, Retarded. He tends to be cross-eyed, meow like a dying weasel, and purr strangely like a poorly maintained diesel engine. It is because of these differences that Charles is shunned from society, racist bastards that they are. BLACK POWER!!!! TAJIKISTAN UBER ALLES!!!!

Some Wacky Antics of Charles[edit]

Charles is like a tiny god and has many many problems. Also, he is a Special Needs Kitty.

Charles Goes to the Veterinarian[edit]

One day, Charles stopped using the litterbox! I quickly checked to make sure the martians hadn't taken over, and then took Charles to the vet. That monster pumped Charles full of ketchup until the poor fellow exploded. Fortunately, since Charles is a time traveller, he was able to go back and save himself by killing the vet's parents.

In Soviet Russia, Communist Russia goes to YOU!!

It was doubleplusgood. Charles goodthink.

Heat rays may be involved. The chances of Charles coming to Mars are 1 to a million.

Charles Goes to the Bank[edit]

He needed something to do with his time. Meanwhile, he robbed it, using only his mind. Why, you ask? Because Charles can do that shit. charles rocked your maum.

Charles Puts On a Hat[edit]

There must have been some magic in that old silk hat he wears. The monocle is just for show.

Yep it was him that when his blue finger paint fell in his yellow. He originally decided to call it blellow but he is retarded (see Randy Orton) and said Green.

He ate himself and then realised he didn't want to be eaten so he went back in time and got "How To:Stop Yourself from Eating Yourself for Dummies" and saved himself

Charles Pleads For Uncyclopedia to be Screened[edit]

Please huff the above entry!

Jesus, Charles, you make being a Special Needs Kitty look SO disgusting, like.

You know nothing of the in-joke.

Charles Does The Third World[edit]

Seeing the cock-up the World Bank made of continental Africa, Charles went back in time to the 1970s and asplode their heads, before quickly huffing the evidence. This has rendered Charles the only kitten capable of huffing reversal, which makes him a Class "S" threat to the Post-War Administration Bureau.

Charles was sent into Shadow Moses to take out FOXHOUND, only because he thought FOXHOUND was an actual animal. Much to his disappointment, he was faced with Genome Soldiers, and the prospect of having to go up an elevator. This caused him to yowl with terror and he quickly retreated, not to be seen again until Uncyclopedia Krazy Karts in 2001 on the Hen Wing Advance.

Charles Gets Kicked Out Of Metallica[edit]

Charles did something stupid and James fired him, so Charles has spent the last 20 years trying to sate his own bruised ego in his own band, Meowdeth. He was last seen in the movie "Some Kind of Monster," licking his swollen testicles clean, while in a meeting with Lars and Kirk, who were sent to clear the air, but ended up having Lars' snare pissed on. Hence the awful snare sound in St. Wanker.

Charles Puts FMW Out of Business[edit]

Charles kidnapped Eiji Ezaki and put him in a wheelchair where he stays to this day. He then came out in his Hayabusa getup, and broke his own neck trying to moonsault Mammoth Sasaki. Being a Special Needs Kitty though, he just went back in time to before he broke his neck, and slashed Shoichi Ara'i open. With Ara'i dead and Hayabusa in a wheelchair, FMW went out of business and Charles' dominance of Japanese wrestling continues at large.

Charles is immortal, and cannot die by conventional means. So sorry.