The car alarm is a result of 9 years rigorous selective breeding and car organ transplant. McGregor Gendeleev discovered that parts of cars could be cut out of one car and connected up in another car and it would still work correctly.

In 1967 McGregor Gendeleev found that if a horn form a Ford Mustang was removed and reconnected in a Dodge Charger it would sound exactly like the Ford Mustang's horn while in the Dodge Charger. Similarly if a Dodge Charger's horn was placed into the Mustang it would sound like the Charger's unique horn. McGregor Gendeleev developed a theory that all car parts where inter changeable with each other. To test his theory he took the engine form the Ford Mustang lifted it gently out of the engine bay and bolted it back into the Dodge. He then attempted to start the car. The engine started but as he lifted of the clutch the car failed to move. He investigated the underside of the dodge to find that another new discovery, the drive shaft was not correctly connected to the engine. So he decided to weld the engine to the drive shaft. McGregor made a second discovery, that the gear box is not meant to be welded together. With a broken Dodge, McGregor tried to do the same to the Mustang with the dodges old engine this time successfully creating a working Dodge Mustang. This new discovery lead the way into a new era where cars where no longer grown on trees but built and genetically engineered.

McGregor Gendeleev when began experimenting with different car organs connecting them together in different ways. He coupled together a car horn, an ignition switch, a Sears DieHard&trade battery, a live weasel, and a megaphone. The result was an organ which gave off sound when sound was made. Modern car alarms are very similar to this primitive effort; however, are more reliable.

Why do car alarms go off?[edit]

The modern car alarm is more unsophisticated than McGregor's simple effort. Nowadays car alarms go off for one of six reasons:

What to do if an alarm goes off[edit]

There are several courses of action if you hear a car alarm go off:

Human evolution and the car alarm[edit] 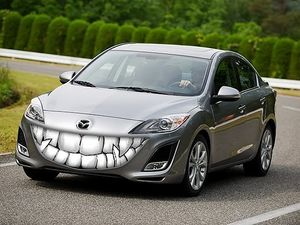 The next step in technology: The "Active Defence" alarm.

The car alarm was an advantage in 1967 as it was a distress call given out by the car that was audible to human ears. In 1986 however, human evolution means that people can no longer hear a car alarm go off. Many older people still respond to car alarms in shock; younger people have however become immune to the sound of a car alarm. As a result car alarms are regarded as pointless noise and in America many people are campaigning to have car alarms banned. This however is pointless as they can no longer be heard by most people; you are considered as gifted if you can hear one.