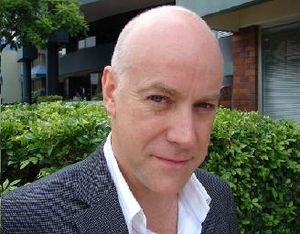 The first ever photograph of God himself.

For those without comedic tastes, the so-called experts at Wikipedia have an article about Anthony Warlow.

Anthony King of Singing Sexy Voice Ladies Man Warlow (born 18 November 1961 in Wollongong, New South Wales, Australia) is an Australian actor, singer, and banana critic, noted for his Michael Crawford impressions and considerable sex drive. It is rumoured by many in showbusiness that he actually is God. He has appeared in many Musicals which have over the years made several billion people fall in love with him, oh the amount of fanmail he gets! 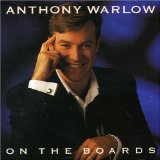 Anthony Warlow was born in 24601AD to Zues (father) and Mary Martin (mother). He found it hard in his childhood as his father, being a greek God and all, never had much time for him, this resulted in him spending a lot of time with his mother who encouraged him to follow her into the world of musical theatre. Zues was not happy when he heard then news, he had wanted Anthony to be a very 'Manly' God and do 'Manly' things like wrestle and grate the heads of children who had been bad. At the tender age of 783 the young Warlow ran away from home to become an actor in musical theatre. Note to reader: Anthony had hair back in the day but being so many years old, nobody knows quite how old (but rumour says he is 24601 years old) he has lost most of his hair

Anthony flourished from the moment he entered Musical Theater He was always a natural, most likely coming from his mother Mary Martin. He once found himself outside a theatre for the show Les Miserables the actor playing Enjolras had come down with a sickness bug and had brought both his understudies down with him, how that happened we will never know, Anthony just happened to be outside the theatre when the manager shouted out 'Can anybody sing very powerfully and know the role of Enjolras' Anthony leap at this opportunity belting out 'Do you Hear the People Sing' and immediatly landing the job, after just one night he was given the role permanantly, much to the other actors disgust. Anthony although had slightly lied about knowing the part of enjolras, in fact he had only known one song from the show, the one he sang, but it only took him 37 seconds looking through the score and lines to have perfected his role 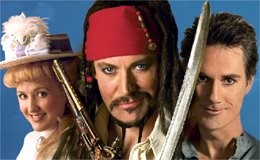 It is a well known fact that Warlow endured a long and successful career as a pirate. Although rumour has it he was actually the original pirate and all other pirates followed in his example, even Blackbeard. Warlow's ability to wield a sword and a gun at the same time whilst slapping his enemy around the face with his feet drove fear into the hearts of other pirates, they would go out of their way to avoid him. Some even thought that if they had his face tatooted onto their buttocks this would prevent them from sudden death should they have to face him.

Warlow's ship was naturally named after him 'The Warlovian' it was the fastest most feared ship on the waters, it is believed to have sunk the Jolly Rodger at least 7 times. Some of Warlow's crew included Atilla the Hun, Vlad the Impaler, King Henry VIII, Gordon Brown and the fearless Nathan Lane With his crew mates on board there was nothing to stop the Warlovian from wrecking the world, many of the ships to be lost in the Bermuda Triangle are believed to have been sunk by the Warlovian

The sinking of the Bismark during the Second World War was infact, although not known by many, sunk by the Warlovian. Shortly afterwards the British army claimed to have sunk the dreaded German ship themselves. In fact they got nowhere near, the only man capable of coming face to face and destroying the ship was Warlow. The army have still not credited Warlow for this and most history books tell the wrong story

Is he Actually the Real Phantom?[edit] 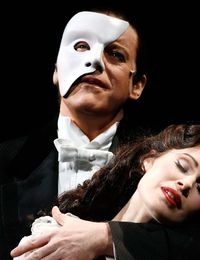 Anthony Warlow - The Real Deal? Our experts believe so! Since he has been around for longer than anyone can remember, there have been periods in his history where he just disappears off the records. A certain one of these is when short tubby French journalist Gaston Leroux recorded his 'story' (Dun dun duuuuuuuuuun) of the mysterious Opera Ghost, y'all. Run and tell THAT. Warlow was believed to be in Paris at the time as his Symphony No.1 was premiered. After its very bad reception (especially the use of a chromatic scale and dissonance in certain movements) he disappeared and our experts believe he could have lived beneath the Opera Garnier, maybe to try his hand at opera, or maybe progressive rock. Well, who knows with Gerard Butler about. He's one shady lady.

Andrew Lloyd Webber commented on his musical The Phantom of the Opera 'I just woke up and it was like somebody had planted the melodies in my head, all I had to do was write them down'. Now this seems too big a coincidence to ignore. Our experts believe that Warlow was actually the composer of the famous musical, using ALW as a vehicle. Warlow did nothing about convincing 'The Lord' to cast him in the lead, as being the real Phantom he believed he would be automatically cast. This though was not to be and Warlow still laments the loss to this present day. He did not however make the same mistake as the Phantom was cast in Australia taking his chance and making history to be the oldest Phantom to play the role, at a mere 24601 years.

Warlow recently made a return to Phantom in the Australian revival as the public could not get enough of his smooth look and the rich tone of his voice. Many women have been known to leave their husbands and live outside the theatre, camping in the hope that Warlow would sweep them up and make love to them in his changing room.

Anthony Warlow has had several million women over his life, our experts believe. It is rumoured that he actually has a certain disease which makes him extremely attractive to women. Some of his partners have commented on him as a lover and these are quoted below.

“He did things to me no other man could”

~ Ruthie Henshall on her love for Anthony

“Forget what I said about Andrew Lloyd Webber Anthony had the biggest willy, why do you think me and Andrew got divorced”

“He always did have a hold on me”

~ Philip Quast on his feelings for Anthony

“He can read my books anyday”