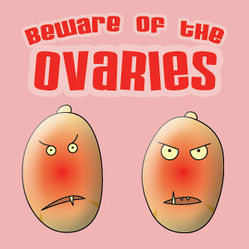 Gamete and Falloppio, the Angry Ovaries, from the popular cartoon series of the same name, became household names during the mid 1990s, with merchandise and catch phrases making their way into popular culture.

For those without comedic tastes, the so-called experts at Wikipedia have an article about Angry Ovaries.
“The Angry Ovaries....bleeding marvelous cartoon series.....”

The Angry Ovaries was a popular animated television series, broadcast in the early 1990s on Nickelodeon. Though a small minority considered it crude and uninspired, it regularly topped the viewing figures, with fans eagerly awaiting each months newest installment.

The show revolved around twin brothers Gamete and Falloppio, frequently focusing on their intense sibling rivalries, but also examined how the two could never come together. Critics of the series often focused on the sometimes obvious cycles {the brothers start off friendly, become increasingly belligerent, spiteful and violent, with a return to the status quo once the bloodletting has finished) within the plot of each episode, which seemed to demonstrate a lack of depth to the characters, and reused the same plotlines again and again.

The series was cancelled in 2001, after it was "supposedly" linked to a number of high profile cases of violent abuse, and a mere four cases of murder.

The writers of the series have stated that the Angry Ovaries were heavily influenced by the characters Tahei and Matakishi, the two goofy, buffoonish characters that serve as sidekicks to General Makabe in Akira Kurosawa's 1958 film The Hidden Fortress. They also claim that, in part, the duo represent an homage to two of the Three Stooges, though many consider this to be the sort of things that sad, tired hacks with little or no talent often say in an attempt to make themselves sound intellectual.

Gamete: The smarter and more articulate of the twins, Gamete is seen as the stabilizing influence. Often moody and sometimes melodramatic. Gamete abuses his brother constantly for sloughing off, both verbally and physically. Suffers from occasional violent mood swings.

Falloppio: The more troublesome of the pair, Falloppio is always up to no good, despite his obvious lack of intellect. Throughout the series it is often Falloppio who initiates the situations in which the brothers find themselves involved with. 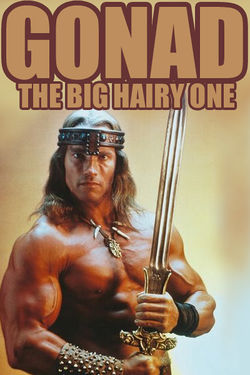 Although a childrens cartoon series, many critics and viewers alike appreciated the shows more adult humour, often utilising a more sophisticated sense of word play jokes and cultural references, and vaguely risqué storylines. In fact, whilst generally considered a childrens television program, the Angry Ovaries enjoyed a large percentage of adolescent and adult viewers. Women over the age of age of 50 were relieved when the episodes stopped, saying that without the monthly show, they could focus on enjoying life to its fullest, though didn't explain in any detail why.

Some of the repeated themes that featured throughout the series include:

Gamete and Falloppio are the only characters to appear in every episode, though a number of supporting characters often recur within many episodes. These include:

Long In The Penis

Mission To The Big, Hot, Thingy

Guess Who's Humping to Dinner

The Day the Earth Really Got Fucked Up

Boner Looks For His Toots

Fag in the Mirror

Crack in the Sack

Things That Go Rape in the Night