UnNews:Amber Heard found to literally be a turd

From Uncyclopedia, the content-free encyclopedia
(Redirected from Amber Heard)
Jump to navigation Jump to search 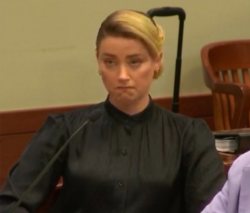 Uh oh. Looks like Amber's about to take a deuce in the judge's bed.

FAIRFAX COUNTY, Virginia -- During the trial of a highly publicized defamation lawsuit filed by actor Johnny Depp against his former wife Amber Heard, it has been determined that Heard, who divorced and probably battered Depp allegedly over arguing who shat the biggest dump on record,[1] is actually the record herself.

In a complicated situation, forensic psychiatrist Shannon Curry, who worked with the estranged couple during attempts at counseling, admitted that Heard had asked her to diagnose her with PTSD and trauma after suffering "abuse" at Depp's hands. Curry testified that she instead diagnosed Heard as a "majorly constipated, pathologically lying, bipolar piece of shit." She had also contacted Heard's parents, who admitted that Amber was in actuality a massive turd, the largest at the time after Heard's father had consumed copious amounts of Taco Bell[2] in the week leading up to the massive deuce. Proud of his achievement, Mr. Heard then raised the turd, which he named "Amber" to his wife's disgust, and the little shit grew up to be an aspiring actress and abandoned her family. 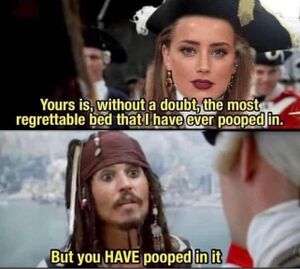 Snippet of video recording played at the trial

Curry reasoned that if Heard "acts like shit, smells like shit, lies like shit, and treats people like shit, then she must be a piece of shit". This was despite Heard claiming to be a feminist role model and appearing at numerous charity events and claiming all the credit. Curry came to her conclusion after looking through evidence, including an audio clip of Depp and Heard that recorded the fight that precipitated the divorce.

Depp, who was arguably in character as Jack Sparrow in the recording, kept asking "Why is the rum gone?" Little did they know that the "rum" was actually laxatives that Depp had to purchase as a prop for a Pirates of the Caribbean movie due to Disney cutting budgets after spending all of their money buying Fox. Heard screamed that Depp had drank it due to being "such a drunk, old meanie", then she abruptly switched her narrative to "I drank it all because YOU NEVER give me anything or buy dinner for me!" before spitefully farting in Depp's face, which Heard's team inexplicably tried to spin up as Depp punching Heard in a shitty attempt. All of a sudden, the recording showed Heard rushing to the bathroom screaming "Me poo! Me poo!" and ultimately soiling herself on the bed, which she later blamed on the dog.

Heard's lawyer then asked so many shitty questions in succession that the audience in the courtroom likewise shat themselves after being subjected to all the BS questions and being prevented from going to the restroom; whenever someone tried to leave to take a bathroom break, they were immediately met with "OBJECTION, HEARSAY!" which the judge, being an old-school teacher, somehow allowed. Everyone also shit their pants laughing after the lawyer objected to his own question. Dr. Curry then suggested at diagnosing Heard's legal team as pieces of shit themselves.

Immediately after the court was dismissed for the day to clean up all the shit in the room, Heard announced a new brand of Amber Turd Muffins. Some say that this announcement is Heard trying to capitalize on her newfound status and her legal defense's shitty arguments about muffins in order to pay off the $50 million that she would owe Depp and was done in bad taste, almost as bad tasting as those muffins would be.[3]