UnNews:Amber Heard: I got caught lying in court and was called out for being a turd. I'm probably also cancelled now. That has to change.

From Uncyclopedia, the content-free encyclopedia
Jump to navigation Jump to search
Amber Heard: I got caught lying in court and was called out for being a turd. I'm probably also cancelled now. That has to change.
WARNING:  The following text contains the truth that has been long hidden from the public. Click here if you aren't ready yet. 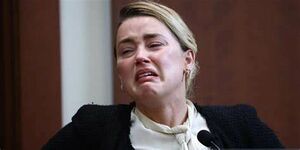 And I would have gotten away with it if it weren't for you pesky ugly unfair sexist meeeny rando jurors! Waaahhhh

Ten years ago I started dating Johnny Depp. He looked like such a nice dude. He was so yummy. I wanted to eat him.

Johnny even gave me some stuff that I really wanted, like wine and drugz, moneeey, and several of his houses in which I could bang other guys and gals. I even tricked him into leaving his stupid hoe girlfriend of 20 year and then he married me.

After a while Johnny didn't want to do drugs anymore, so I teased him about it. Then he wouldn't give me everything I wanted. He became mean. So I tried to make him do drugs again so he would give me stuff. When he didn't I started nagging him and even beat him up a few times. I threatened to tell on him for being mean.

Six years ago I became the face of domestic violance victims. I made up some stinky stories abouth Johnny so that people would make fun of him and made it look like I had a boo boo on my face with Amikaaa creem or whatever that pixie dust is called. I even took a poopoo on his bed because it was funny. I told people that Johnny said mean things to me, so he's a domestic violance abuser.

I dumped Johnny and everyone believed me at first. They even gave me $7 million of Johnny's money and I got to be in a big movie show! Then I wrote this article saying how mean Johnny was to me and said that everyone who still likes him is also a meanie. The ACLU then told me not to mention him by name so I could get away with it, even changing much of what I wrote so it wouldn't be as obvius. And I kept beating Johnny, not like that pussy ass bitch is even capable of knocking me out. And I told on him for beating me up, and they all believed me! ahahhahahaahhurrrrhrhuuuuurrrr

Then Johnny told on me and soo'd me for lots and lots of money. Not fair! How can he find out? Not like I was being a bad liar. I'm the bestest, prettiest liar in the world!

Hahahahdsflahsfahhaherrhrhererer I'm so inceredily high and sad right now. *vomits* I just took the last of my shrooms, Molly, 50 megapints of red wine, every single perscription drug in my cabinet, the last of my acid, chalk that I thought was cocaine, a Tide pod and a megapint of dish detergent. I also strapped my surrogate daughter with Elon Mollusk in my car. I'm also playing Candy Crush AND cyberstalking Johnny on my phone as I type this. Ya dare me to drive?

Now it's all JOHNNY'S fault that I have to write this without any help. No one wants to work with me anymor except that Eve Fartlow loser! Warner Bitches kicked me out of making the new fish man movie! And Elon Rockets doesn't want to give me any more of his money! How was I supposed to come up with a megapint of evidence to prove that I WASN'T lying? The jury read me like a book and put me in time-out. Why am i so bad at lieing!

Fuck the courts, fuck the jury, fuck AMERICA for catching me red-handed unlike that judge in Britain who I gave head! Fuck Johnny! I just wanna fuck him one last time. I didn't mean to do all this stuff! But if I did it wasn't that bad! And if it was bad it's Johnny's fault! He deserved it! Now everyone calls me "Amber Turd" and I don't like it! Waahhhh #girlsruleboysdrool

Why is Camille Vasquez's magic hair tie wrapped around me? Why did I wind up stealing it? Now I can't lie anymore. Johnny hit me! jOhNnY hIt mE... with a fair trial and sexy, competent lawyer that exposed what a massive lying turd I am! Aghgahgaaharr! Waahhhh! #somegirlsruleallboysdrool

Amber Heard found to literally be a turd