From Uncyclopedia, the content-free encyclopedia
(Redirected from ATV)
Jump to navigation Jump to search

For those without comedic tastes, the so-called experts at Wikipedia have an article about All-terrain vehicle.

The ATV defending itself against its greatest feared enemy, the Redneck. This young whippersnapper failed to tame this wild beast.

An all-terrain vehicle (ATV), also known as a quad, quad bike, three-wheeler, or four-wheeler, is a magical animal that has been bred in captivity by Rednecks for over 9,000 years. They are generally trained for riding and often used as a primary mode of transportation throughout the regions.

ATVs are a cousin to the motorbike family, but somewhere during its evolution, the ATV went developed two more wheels. It is glad to not be its retarded cousin, the Tricycle. They would roam the countryside performing "sweet" tricks and throwing the ancient indigenous peoples off their backs for what seems like only 2 hours ago.

When the White Man came over on the Titanic hundreds of years ago next Thursday, they saw these noble beasts and tried to trade to the natives for some fur and crack. The natives noticed this thievery, and denied any purchases to them unless they had a frequent shoppers card.

The Measurements for an early ATV. In this special picture, you can see the worst predetor of ATV's, Spider Man waiting for his next victim.

The frequent shoppers card idea was a good idea, but since everything was made out of treebark and knives, it was very easy to counterfit, so the Native Americans gave up. Eventually the Indians were place in Camps, which made ATVs the more easier to take. Eventually the people that would become the followers of the Redneck Religion would see the benefits in using these, and eventually adopt them as a part of easier living.

This is the part where we talk about some killer sweet tricks that you can do with the ATV. Since we don't even know what we are talking about, we will just list how to some of the basics.

Basically when you go off a hill, jump up and the air, and pull the thing from out from underneath you. When you have completed that, you should check to see if your groinal area has any padding, because when you hit the ground, the the isn't the only thing you hit. If you do that, you will be the most sweetest and killerest dude ever in the history of the world, ha ha ha, not really you loser. 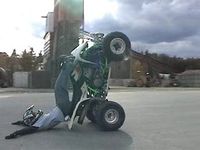 If your wheelie looks like this, then you are the Wheelie King, and fucking eXtreme. How 'bout some fucking Mountain Dew?

When you and your posse are rolling down the street in you chromed out 4-wheelers, you might want to prove how much of a ghetto cowboy you are by pulling a wheelie.

When you are drivin' down the street you want to pull the controlling apperatus towards your chest. If done right, you should be laying down in the middle of the street, getting ran over by your so called posse. They never did like you anyways.

Those were just some basic tricks that you could use, just so you can say that you know how to do something with that piece of junk that's been sitting in your shed for the past 5 years, since you were "too busy" to ride it anyways. If you want to learn more about some nice tricks you can do you can go ask someone who probably knows how, and they will surely help you. I can only do so much.