From Uncyclopedia, the content-free encyclopedia
(Redirected from A.C.)
Jump to navigation Jump to search

“The galvanic principle has always galvanized my sense of wonder. Especially when I put my tongue across the poles of a fully-charged Leyden jar.” 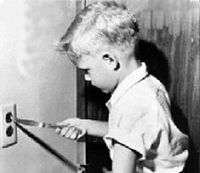 A fun way to learn how electricity works.

Electricity is a scam devised by the famous American plagiarist, Thomas Hernia Edison in the late 19th Century.

The basis of Edison's scam was his discovery of small gremlin-like creatures called "electrons", which could be coaxed to travel down lengths of copper wire and perform useful tasks along the way. He put together a company called Consummate Edison, Con Ed for short, which offered to sell electrons.

But here is where the scam came in: because electrons are so small they can only be seen by bacteria who have their own microscopes, Edison devised a scheme whereby customers were connected with not only a "live" cable which allowed the electrons they bought to travel into their homes, but also a discreetly named "neutral" cable, down which the electrons were sucked back to the electricity factory. Customers could thereby be unwittingly sold the same electrons time after time.

“We will make electricity so cheap that only the Muslim Mosque will burn candles, and that will be only for show.”

Edison's scam quickly made him filthy rich, and he was able to spend the rest of his days inventing things like flexible teeth, fur-lined salamanders, and silent radio.

When Edison discovered electricity the western world, particularly the United States relied on petrochemicals for fuel. People burned gasoline to power their kitchen appliances and air conditioners, and everything from locomotives to lorries used paraffin or diesel oil in their internal conflagration engines.

The US government quickly realized that Edison's new discovery threatened the reign of Big Oil, passed legislation to limit the spread of Edison's invention and favour the petrochemical industry. The politicians objected to large personal fortunes being made from energy unless those fortunes were made by their direct supporters.

In this struggle Big Oil, a massive corporation dedicated to altruistically supporting its employees and customers, provided invaluable support to the US government. Big Oil provided generous funding -- nay, more than generous, superlative-- funding to further this legislation and, as a minor side effect, establishing the US Congress as a club of rich boys. Soon Henry Ford began to produce Automobiles, designed to use only gasoline, and Edison's invisible gremlins were virtually banished from the road.

However, in the home, where the electricity eliminated the smoke and noise of gasoline-powered microwaves, toasters, and blenders, Edison was outselling Big Oil two-to-one. 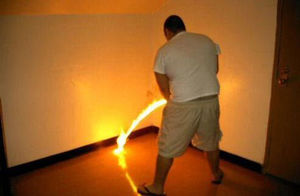 Rubber soled shoes should be worn when urinating into wall sockets

Edison initially generated electricity by training the electrons himself, but as demand increased (along with Edison's fortune), he was forced to employ minions to perform this task on his behalf. Unfortunately these minions were less skilled trainers, and the electrons sometimes rebelled against their masters. To make matters worse, Edison had cut costs by feeding the electrons harvested souls. This resulted in very negative electrons that were prone to revolt.

In 1897 the Great Electron Revolt took place, when Edison's huge workforce of electrons attempted to stage a walk-out. However, due to lack of effective leadership and planning in the Electron Union, there was nowhere else for them to go. None of them had homes, families, or athletic clubs. So they milled around aimlessly for awhile, and then started running down the wires in the wrong direction -- the opposite of the direction Edison wanted them to.

Sadly, Edison never regained control of his electrons. To this day, electrons travel out to customers along the "neutral" cable, and return along the "live" cable. The few that try to go the other way are quickly annihilated by their angry brethren.

Electricity originates inside clouds. There, it forms into lightning, which is attracted to the Earth by golfers. After entering the ground, the electricity hardens into coal, which, when dug up by power companies and burned in big ovens called 'generators,' turns back into electricity where it is transformed by TV sets into commercials for beer, which passes through the consumers and back into the ground, thus completing what is known as a 'circuit.'

If one of Edison's copper wires is placed in contact with water, the electrons get wet and cause all kinds of havoc. The wet electrons run wild, attacking anything that is in the water -- fish, babies, ocean liners, or islands -- with disastrous consequences. This attack, called "electrocution", is much feared by the users of electricity. 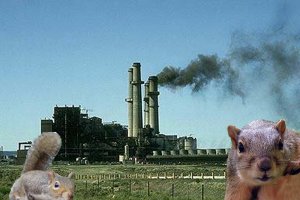 Crazed mutant squirrels are one of the pollutants produced by electrical "generation" plants.

In the late 20th century the massive worldwide demand for Edison's electrons lead to the construction of "generation plants" all over the world where electrons are convinced to travel into cables. These plants are not nice neighbors, spewing smoke, carcinogens, radiation, smut, mutant squirrels, and other nasty pollutants. It takes a lot of persuasion, publicity spin, and general hot air to get these plants built. This hot air increases global warming, and Big Oil has recently started lobbying the US government for a complete ban on electricity and a return to oil-burning machines which naturally generate much less heat.

In some laboratory-scale power generation plants hamsters have replaced the electron trainers or "generators" usually used to "generate" electricity. These hamsters do not run in wheels, as some might suppose, but are instead coaxed to fuse and thus release energy. To start a hamster fusion reaction electrons are herded into a large doughnut-shaped mass of copper wires. In the centre of the donut is a single hamster. An antihamster is then hurled into the donut; it collides with the hamster, and both of them disappear in a small puff of green smoke. This strikes fear into the heart of the electrons circling around the donut, and they all rush quickly down the nearest wire towards a customer.

However, the worldwide shortage of antihamsters and the complex disposal of the small bits of toxic fur that can be left over after the reaction make these reactors problematic. Most electricity is still generated by the "Hot Air" method.

Method: Place your wet finger into the socket. The louder you cry out in agony, the more powerful the electrical current is. If you die as a result of this experiment, there's obviously a lot of current, and you shouldn't have doubted the amount of power in your home in the first place, you silly person.

Warning! Remember to turn off the electrical socket after finishing this experiment. Leaving an unblocked electrical socket will cause electricity to leak out, eventually filling up the world; resulting in the death of all humans and animals due to electrocution.

Another thing to do to measure electricity is to take a key (maybe the key to your older sibling's car; if you don't have an older sibling who drives, steal an older sibling from somebody else) and go out into a thunderstorm. Hold the key up and let lightning strike it. It's fun to do!!!

Caution! This can be dangerous. It is strongly recommended that you have a couple of drinks to steady your nerves.