The event that occurs if Florida Man gets hungry, a Zombie Apocalypse is one of the deadliest disasters to ever happen to mankind. Since 1780 there has only been 198 zombie apocalypses, most occurring in places like the UP.

The first zombie apocalypse, dubbed "The Feast" happened in 1021 when Florida Native Rivercross Makawee got very hungry and then became the first zombie in history. After he ate his first victim, the zombies quickly spread across all of North america, famously bringing down the pre-colonial native american civilisations of the Mayans and Cahokia. They later went on and killed the Vikings coming to america and even Bruce Lee.

Once europeans sailed across the ocean to find El Dorito, they quickly found Florida. In 1512 they came in contact with Florida Natives, and subsequently after depleting the food supplies of the natives, Zombies. The zombies quickly took over the settlement and the now zombified europeans took their boats and sailed their way to Europe. They landed in Casablanca and had a nice vacation.

The 76th zombie Apocalypse in 1666 was dubbed "The Purge" due to the movie that came out earlier that year with the same name. It was a bloody event with a death toll of more than 78 billion people because of the globalised trade systems that were introduced in the last update. Europe also had a very bad healthcare system at the time, especially compared to other countries. The result was that it left a huge mark on Europe, seen in the image below. 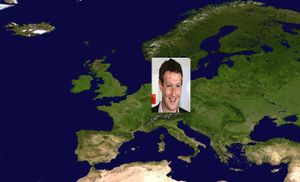 The mark left on Europe from the 76th zombie Apocalypse

The 188th zombie Apocalypse in 2003, dubbed "The Big One", was the deadliest zombie apocalypse of all time. It was a result of Florida turning into a communist dicatorship under chairman Florida Man the year before. The economy crashed during this period, and as a result, many Florida Men turned into zombies due to hunger. The lack of immigration laws enabled zombies to go out of the country and many went out of Florida and began attacking the rest of the world, including other UP states. This disaster took the lives of 139 trillion people.

As of late, there has been a spike in zombie apocalypses due to Florida being overpopulated. The most recent zombie apocalypse was when Florida Man used his tail to kidnap a Florida Woman, intending to starve her to death. This failed, resulting in the first Florida Woman to become a zombie. It was met with a lot of backlash from the community, as they felt the character has always been male, and that shouldn't change. The devs did not care for this, and soon the 198th zombie apocalypse came, bringing in a total of 200 million deaths, being a big domestic hit. It did worse in foreign countries, as healthcare is improving all over the world, and the border wall was blocking zombies from walking into poor countries.