The Wirral is a peninsula near Liverpool on the mersey side which was formed from the decomposed corpses of Welsh sheep slaughtered in the 2001 foot and mouth crisis. Anyone wanting to suggest otherwise on here will have their page 'undone' by a forum troll moderator known as a Uncyclopedofile. It is an ultra-conservative neo-facist monarchy. In 2006 the New Labour party, headed by Commissar Brown, destroyed all signs marked "The Wirral" and introduced "Wirral" signs, much to the disgust of the French-grammar-loving Wirralites. Wirral newspapers have since reported militant group PTTBITW (Put The The Back In The Wirral) are growing in number. The population of the island is cleanly divided by the Electrified-Fence clad M53 motorway (aka "The Wall"), with all citizens on the eastern side being low-life ignorant Chavs, recently ear-marked for a cull in 2011. The western side however, a short swim from Wales, is one of the most expensive places to live in the United Kingdom and as such has a distinct aroma of inbreadery about it. 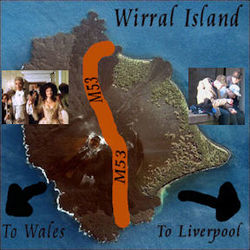 The three major cities of Wirral are Birkenhead, Wallasey and Thornton Hough. The administrative capital and seat of government is Irby, although the Queen's official residence is in Meols. The town of heswall contains Wirrals population of snobs and old people, all though both of these can be sighted in west kirby and caldy. The Wirral is only accessible by a weekly hovercraft service from Llandudno in North Wales. Plans to build a tunnel to Liverpool were shelved in 2003, due to the threat of economic migration from strange men with moustaches.

Wallasey consists of Liscard, Seacombe and Egremont being the three main areas, none of them being good places.Seacombe is full of chavs, Egremont is the chav-scally things. And Liscard is quite frankly a disgrace of a shopping centre, with Marks & Spencers, Tesco and Littlewoods all commiting suicide in the mid 90s.

In 1942 Nazi Germany briefly conquered the Wirral, after successfully taking the Channel Islands (3 KM to the south). They never left.

Tourist attractions in Wirral include the merkin factory in Port Sunlight, the M53 Country Park (otherwise known as Britain's fastest public footpath) and the Rock Ferry Rock Mines, which directly supply Blackpool with all of its Rock. It is a little known fact that God himself has a holiday home on the south coast of Wirral in the town of Bromborough. Near ASDA, to be precise.Irby Quarry, which is situated just south/west of the famous lesbian colonys of Arrowe Park Hospital, is of much celibrated joy, for once a year they all congregate amongst the heather and gorse bushes to grace the spectacular natural ampitheater with much excitment.Dancing and singing to the beat of their large drums that they balance on unnatually large heads.

Wirralites are often not blessed with perfect diction. Oft compared to the nearby Scousers, these hirsute beasts are often found speaking in tongues. Chief amongst these is the coded slang of acronym. ERYB, WYRTOC, SWIDT, AFAIK are all common. Favourite shows on the clockwork picture-box are HIGNFY, WLIIA?, TTIAO and QoS.

Theological linguists suggest Wirral as a possible origin for all modern language - Bidston Hill being the site of "that bit in the Bible when they (the wizards) tried to build a tower to reach Heaven and God gave them an almighty FU and created Welsh, or something." This assertion is based upon the great diversity in language across the islet where both vowels and consonants can be interchanged at will and still convey accurate meaning and sentiment to the receiver. This however is not true of Heswall, where the residents communicate by manner of morse-coded oral clicking.

People living there are often referred to as Scaffs - being half Scouse and half Taff.

If you want to get "gear" OR drugs Wirral is not your place. There are no drugs whatsoever to be found in Wirral and the insinuation that Resin can be purchased by the Kilo in Seacombe is completely unfounded. From a statistical point of view, you are likely to be outnumbered by rozzers on the Wirral 2:1 except in Seacombe where there are in fact 5 Policemen for every scally in a Berghaus Jacket.

Wirral in 2008 was crowned the European Capital of Cottaging, with the public loo at Harrison Drive hosting various 'events', including one with a senior Merseyside police officer. [1] The police were later accused by the gay community of using "strong arm tactics". Oooh get her!

In Wirral a school or college is hard to come by, in total it is believed that there are five schools for wirral and two colleges. The schools include Neston's school of inbredery prevention(NSOIP), which includes lessons on how to tell the difference between your sister and a lover. Birkenhead's school on how to rob stuff, lad! (or BSOHTRSL!) which has a brilliant yearly turnout of chavs, such as Josh"the spaz" Corlett, and Nick "the party boy" Williamson, ready for the grand wide world and rob it's hubcaps. There is also the school in Prenton and Tranmere which excel in teaching it's students on how to not lick burny things or play with pointy objects. Any student successful at the aforementioned schools are sent to colledge, whereas, the others are taken round back and put out of their misery. There is another school, Saint Anselms college in birkenhead, well known for its fine heroin stash that the christian brothers keep in the chapel, here you will find the babez crew, wanker crew, and part of the heswall skate park crew.( see below.)There are rumours of a sixth school, named Upton, which is owned by the illusive Beck(who is highly involved in the drug empire), Amy(The killer of ducks)and Lucy(the girl who steals shoes for a living), although this has not yet been confirmed by anybody with an IQ higher than 52. Additionally, a borstal exists, where the 1970s film 'Scum' was filmed, known only as "Moss Lands", although little is known about what goes on behind those walls. Wirral is also famous for it's WGSCPFBGAH (Wirral Grammar School County Prisons For Bis, Giraffes And Hermaphrodites) in which an 11+ test must be passed in order to gain access. This test consists of year 6 children having to run across a sniper field from one side to the other without being shot. Those who successfully make it to the other side are then immediately escorted to an execution chamber to be crushed by hydraulic pistons and are processed into a protein shake to be fed to all the seriously injured children who failed. The objective of this 11+ (or 12+, or 13+, any age is applicable really) test is to teach us that the only way to succeed in life is to get shot in a field.

In the two colleges, students are taught on the basics of human survival and life extention, for example lessons may include: how to understand what a stop sign means and why you should never eat mentos and drink diet cola. Unless you want an all body cleansing.

One College 'Wirral Metrosexual College' has a Campus by the Docks in Birkenhead. The Principal, an ex Navy boy, is suspected to be giving private lessons in Submarine operations in the Morpeth Dock in exchange for high fives and the Student's lunch money.

After leaving college students are free to attempt to join universities elsewhere around Great Britainland, if any will take them.

Things that don't live in houses but outside like in trees, innit lad and such[edit]

In Wirral you can find a plentiful of creatures to watch and examine, unless your a local, in which case your more likely to torture them. Anywho if you are ever visiting do take time to see the amazing 'Glue Sniffing Badger' found only in Birkenhead park; it is known to be nocturnal, however due to it's glue smelling ways, can be seen at all hours, aimlessly staggering about fields looking for it's next big hit. There is also the 'musical youth singing bird' known to sing as the sun rises on a new day.

Imagine the scene, you've woken up early in your bed thanks to the sound of the glue sniffing badger rooting through your bins. Then there is quiet. Your room begins to aluminate and then "PASS THE DUTCHIE TO THE LEFT HAND SIDE!" vibrates your room as a group of musical youth birds fly above your roof. ahhhhh soothing.

Now I know what you're thinking, but hey Wirral is home to many sports. For instance the local lifesized subbuteo team, "The Indies F.C.", play every sunday for coins from the tens of fans, who come along to watch their squad take on other teams from around wirral (and if their very lucky some english teams come for a kickabout.)

Wirral is also home to a fantasic cricket team, sure they don't have all the equipment, or know all the rules. But, hey, it's cricket and if anyone knows at least, one rule of the game... why not try out today? Your sure to get in with that kind of knowledge...

Plus, the citizen of wirral have, in their own way, cobbled together new sports unheard of in other places. For example, The Yearly Giant Hamster Wheel Race takes places on every May 26th, it features local celebrity, Richard Ford, who has been attending the races now for over 40 years. Sure, some outsiders look upon this as Ford being unable to get out the giant wheel, because if stopped running he may die from the velocity of the wheel; but we locals, see it as Ford's passion. There is also 'The Big fun fun day' at Leasowe castle, were for one night five young girls are locked on the castle grounds overnight and a serial rapist is let loose, whom ever survives at dawn is given freedom. Thanks to CCTV local families can sit down together and have some good old fashioned family fun.

It is no question that tyrannical dictator Man-Queen Lilly Savage has a fair number of enemies, in her parliament. These enemies, according to recent newspaper articles, have desired to see Queen Lilly removed from her/his throne and have long awaited their change to disgrace him/her. Recently those enemies have had their chance, it would seem.

The disgruntled mining-chav trolls of Rock Ferry, had unionised (By which, most reports indicate is only a group of inept leaders sacrificing victims to their various Netto Gods.) and had marched on to Queen Lilly's palace, armed with pitchforks and empty bottles of WKD, attacking and injuring some residents and passers-by. Whilst, the Chav-Trolls where immediately exterminated with lethal force by the palace guard, the enemies of Queen-King Lilly quickly pounced upon the event, citing Lilly's incompetence as the reason for the rebellion and ordered a 'Vote of Removal", which was passed. At weekends, Queen Lilly doubles as the third lane of the Mersey Tunnel by opening her legs.

The masses are now looking for a new leader and are hoping to find Lilly's successor through a rigorous talent competition, filled with fabulous singing and dancing numbers. (Including the odd murderous blood-sport) Bookies are currently backing local celebrity/self-inflicted accidental prisoner Pete Price to win.

In 2011, the councillors for much of Wirral met at Thingwall Parliament to discuss removing Birkenhead. Several ideas were raised such as a nuclear strike or simple poisoning, however the most straightforward answer was to hacksaw from Bidston Tesco down to New Ferry and float them out to sea. They were recently seen passing Greenland, easily recognisable with a half-built Asda.