Why?:Isn't there a toilet in the woods? 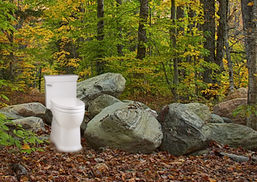 Is this really too much to ask for?

I've always loved the idea of camping out in the woods. Roughing it against the elements, just using your wits and instincts in order to survive against the hard, dangerous womb of Mother Earth herself. Naturally, such an endeavor should only be begun with a whole truckload of equipment and a bunch of friends to bring more shit so that you don't actually have to forage for food or anything, because that would be ridiculous. When my buddies finally brought up camping midway through our poker game, I was all in. This shit was going to be awesome, and I'd already read about how great it was.

So we get out, there, right? And maybe an hour or two in, I really have to go, y'know, to the bathroom. As they say, nature calls. And we were in nature. It's a joke. You like it? I got, like, a thousand of them. We'll hang out sometime, you'll find out.

Anyway, returning to the point, I really have to do my duty. Right? And so I turn to my friends, and they're setting up the tents, and I'm like, "Hey, guys, where's the bathroom?"

They look at me like I'm some sort of idiot or something, and they're like, "There's not a bathroom. You have to go in the bushes."

Why isn't there a toilet here?

Is this some sort of joke?[edit | edit source] 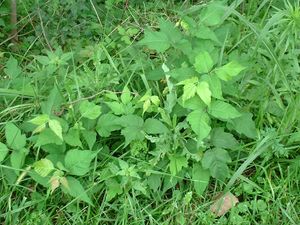 You tell me this doesn't look like candy, I tell you you're a liar.

This news hit me pretty hard, and like any sensible person, I instantly went into denial. Surely, such a travesty as this one could never occur, not in this beautiful, rich country that is America. And it's not like my friends have never tried to trick me before. Like the time that they convinced me that poison ivy was actually sweet, delicious candy. Don't judge me, they made a very compelling argument. You weren't there. They were all, "Hey, did you know these leaves taste like candy?" And then I was all, "Wow, that's so awesome! I want some!" I only figured out what they did later in the ICU. Well, a doctor did. But when he explained it to me for the third time, nice and slow, I got it.

Anyway, given that now-infamous incident, I was reasonably skeptical. I put on my serious face (it looks pretty badass, if I do say so myself) and I asked them again. "Seriously, guys, where's the bathroom?" I did my best to look in pain and added, "There are going to be some bad things going on in my pants soon. Y'know, down south."

They were remarkably stubborn. "Walk out far into the woods, and go there. It's not a big deal, man, that's what you do when you're camping."

That's it. You know what?

Somebody needs to install a proper restroom.[edit | edit source] 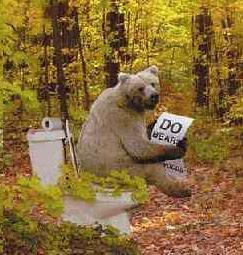 I thought that bathrooms were supposed to be a common public utility. When you take a road trip, you go to rest stops. When you're walking around town, there's a bathroom in practically every decent sized building. Why should the woods be any different? This is bullshit.

I mean, I realize it might be a little hard to get one out here. But they could clear the woods with chainsaws or something. Is that what they do? Just bring out some cement and tiles and stuff, and build a little restroom. If they gave me the materials and some instructions, I bet I could do it. Seriously, what's it like?

I'm not the sharpest tool in the shed, and even I figured that one out. You're telling me that all those, like, Harvard graduates or whatever can't fix this little problem? They went to their fancy colleges, they should be able to build a bathroom. Or legislate something about bathrooms in woods. I don't care how they do it, I just want it done.

I will not just go in the woods.[edit | edit source]

I told my friends about my awesome idea, and they started to get kinda mad at me. "Just go in the woods, goddamn it! It's not that hard! Why do you have such a problem with it?"

Oh, why? Why wouldn't I just go in the woods, you ask? I wasn't going to poop amongst the disgusting, dirty leaves and animal crap that's out there. That's sick. I only go where it's clean, or at least specifically designated. Besides, then it'd just be sitting there. Who wants that? Certainly not me. As a true citizen of the USA, I will not soil our beautiful, picturesque nature reserves with my wastes. That's why. Because that sounds patriotic, and it makes me look like a hero.

Really, though, that's nasty. Also, I was a little bit scared of walking out there in the woods by myself. That'd be perfect if there was some murderer or bear or something just lying in wait. I'd go out there all by myself, and that bear would be all, "I'm gonna eat you!" And I'd be all, "Oh, don't eat me bear! Ahhh!" But I wasn't gonna tell my friends that. 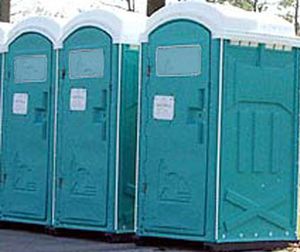 As terrible as these things smell, it's better than nothing.

When I was at that Dave Matthews Band concert last year, a situation like this came up. I mean, that concert was all outside-y too (and also totally awesome, by the way), and they had these things that you could go in, and they weren't actually bathrooms, but they were pretty close. What were those things called? Like, uh... port... portable... portable toilet. Actually, I think it was Portapotty, but that sounds like something a three year old would say. I'm a little bit more mature than that, thank you.

Actually, y'know what'd be really awesome if we had those? I could totally tip one over when someone's inside. That would be so funny. Then they'd be all covered in shit. I can just seem them now: "I'm covered in shit!" And then I'd say something along the lines of, "Yeah!" Who would think of that besides me? No one, because I have the best ideas ever. Like the time when I put those fireworks in my pants and then set them off. That was hilarious, and the third degree burns were completely worth it. It's on YouTube, you should go look it up.

The more I started to think about it, those Porta-thingies would be great, because they're exactly what we need. I thought, you can probably order them or something, right? So I went over to my cell phone to try and maybe get one out here somehow, and I realized I've completely forgotten about how bad I have to go.

It's pretty bad. Like, I'm not gonna be able to last very much longer. Or... not any more at all.

Okay, maybe the woods would have been a better option than this. Also, I probably should've packed another pair of pants. Hm. Well. I... hm.

Featured Why? Article
Featured on the 24th of July 2010
This Why? has been featured on the Why? namespace.   Why?   Because it's good, that's Why?
Retrieved from "https://en.uncyclopedia.co/w/index.php?title=Why%3F:Isn%27t_there_a_toilet_in_the_woods%3F&oldid=4848569"
Categories: