From Uncyclopedia, the content-free encyclopedia
Jump to navigation Jump to search
“I think Mr. Stevens is a goddamn genius!”

“To swirl or not to swirl? That is the question...” 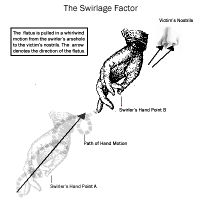 Swirlage, a phrase coined by Aaron Stevens, is a technique used to direct a fart at a target. The target is usually another person, but can be any object or animal, such as an unwary dog or cat. This "Swirlage" technique is used more often than the traditional "Wave" or "Fan," wherein the farter simply waves his or her hand back and forth, forcing the fart forward in a general direction. The problems with these more traditional methods can be summed up into three simple ones: Lack of Speed, (LOS), Lack of Accuracy (LOA), and Lack of Distance (LOD). The reasons for these problems are easy to understand if broken down into a science; With the traditional "Wave," the hand waving the fart is usually moved in a back and forth motion, and it is that very motion that causes "Broken air flow." This makes for a very poor and unstable flow of air, and therefore, an unstable and stagnant fart. But, there is much proficient alternative, and that is Swirlage. In Swirlage, the farter makes a tornado like motion with his finger(s)in the general direction of the target. This siphoning motion causes a very fast and easy moving flow of air, not only making the fart, be it a long boomer, or a short popper, or even a silent one, move quicker at the target, but also increasing its distance drastically. (See the above Figure for visual aid) 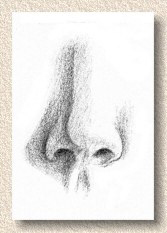 An exact date cannot be pinpointed, but many believe that swirlage is a surprisingly recent discovery. It is reported that, one day while at home, a man by the name of Aaron Stevens let loose a monstrous fart. Simply experimenting, he made a tornado-like motion with his fingers, pulling the fart toward himself. Mr. Stevens discovered that this swirling motion caused the fart to move much faster, since he could smell the fart mere seconds after its release. There it was; who would have guessed that such a simple home experiment could have yielded such a ground-breaking technique? Since then, only two other persons were ever credited for the fine-tuning and improving of Swirlage: Joseph and Anthony Ceschini, Aaron's close friends. 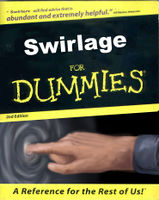 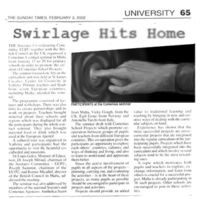 Although Swirlage is still a very underground and unknown technique, it has still found its way into many forms of media- Such as newspaper articles, television specials, and even entire books. These periodicals cover everything from the invention of Swirlage to its pros and cons. Even the popular "For Dummies" book series has hopped on the bandwagon, describing Swirlage's proper usage and situations when or when not to use Swirlage. Recently a newspaper has done research on Swirlage and its results are that of epic proportion. They have scientifically proven that Swirlage not only transports the fart farther than ever imagined, but now proves that it actually increases the fart to its full smell power. For more information on this Swirlage article, see your local library.

Usage of Swirlage in everyday life[edit]

There are many cases in which Swirlage can be used in everyday life. In example: Imagine you are at your friend Tony's house, and his brother Joey is at school, preparing for a play that you and Tony are going to see him in later that evening. You get on the computer for a little bit, but not long after, you let a nasty one blow by without Tony realizing it. You immediately start to swirl, and the joke is on him. He smells the fart and goes, "awwhh, dudeee!" Then to get back at you, he swirls one right in your direction. Remember, Tony, two swirls don't make a right. Okay, so you've both had a swirl in your face. Pretty smelly, huh? After a while, you forget about the swirls in each other's face, your nostrils don't burn like hell anymore, and you and your friend Tony decide to go upstairs. Along the way, you see a picture of Jesus in the hallway, and you just can't resist. You let a stanky one and swirl one right into his divine nostrils. Sorry, Jesus. You go into your friend Tony's room for a little while, maybe listen to a few songs, make some Ben, Hitler, Ed, or corn jokes, then decide to head over into Tony's brother Joey's room to see if there's anything in there to fuck around with. You're in there for a little bit. Laugh that the Anne Frank picture is still up on his wall. You look at his books, draw a Nirvana smiley in one of them, and sit around for a bit. Just then a rumblin' in your gut happens and you release it all over his guitar. You immediately swirl the fart in a whirlwind above his guitar. Just then, Tony releases one on Joey's electric guitar too! You both have a massive swirling session over his guitar and leave because the stank is just too bad. You're walking down the hall, and apologize to Jesus for swirling one into his face, and apologize to Roger Waters for swirling one into him too. You are heading downstairs, and realize it's almost time to go to that greasy son of a bitch, Joey's play. Okay, so you get ready and go down into the car. You realize you might want some tasty snacks to enjoy before or after the play, so you stop at Warfield's. You and Tony stand outside of Warfield's for a bit, then realize you should go into there to buy some things, Tony lets a stanky one right in some homeless guy's tin can and swirl it. "Thank You, Tony, may I please have another?" the homeless guy asks. Tony replies that he doesn't have anymore built up, or he'd let him get some more swirlage. You get the snacks and head to Joey's play. The play is fun to watch, and good acting all around. The play ends and you, Joey, and Tony leave. Just as Joey's getting into the car, he lets a stanky one pressed right up to Tony's nose. Thus ending our day of swirlage. As you can see, swirlage can be applied into many daily activities. Walking the dog, eating a clown, moving a picture, or just funnin' around at a box social with some foxy gals. And don't forget! Don't swirl and drive.

Jesus Says: Every time you swirl, God kills a kitten...Please, think of the kittens

Although swirlage is a perfectly safe, perfectly normal activity, religion has once again found a way to ban something that is fun, just like many other things. This religious swirlage ban occurred during mass with Pope Benedict XVI one day. He was blessing the bread and wine, when out of the corner of his eye, he noticed an alter boy swirling one into a chalice. He immediately banned swirlage.