From Uncyclopedia, the content-free encyclopedia
< User:IFYMB!
Jump to navigation Jump to search 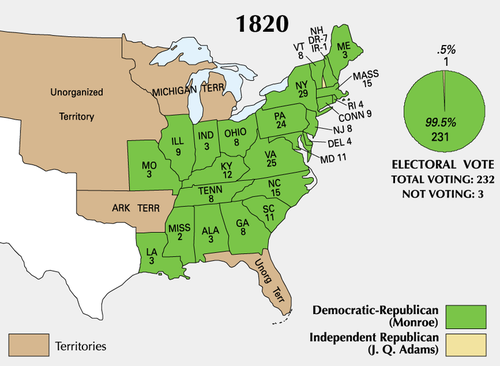 63px
For those devoid of humour, the self-proclaimed experts at Wikipedia have a highly suspicious article about United States presidential election, 1820.

“John Quincy Adams? He got a vote?”

The United States presidential election of 1820 marked the end of Alabama's, Illinois, Misouri's and Mississippi's anonymity from the Elctoral College. And that small state in the North-East.[1] It pitted Democratic-Republican James Monroe, who was well known to the American people as the first president to ride on a steamboat, and not much else, against unsuspecting victim, John Quincy Adam and DeWitt Clinton, Governor of New York.

The Republicans nominated James Monroe, who had served in the army for five gun tooting years before mustering out with the rank of Major. He faced no oppistion whatsoever, and was already President. He publicly went along to National Association for Slow Carrige Auto Racing (NASCAR) and drank Bud light for the first three months of his campaign, because he was the nominee from day one.

The Democrats nominated James Monroe, a true folk guitarist. He wasn't a racist and even had a high school diploma. They did everything they could to cover up the fact Monroe had dropped out of school and praised him on his energy awareness and his use of solar panels. Like his namesake James Monroe, he to worked in the areas of lyric poetry, the Middle Ages, and East-West relations with particular interest in the importance of the Arab contribution to Spanish civilization. He was also already President.[2]

The man standing up for those who did not want James Monroe was the legendary DeWitt Clinton. Many people thought his name was a code name such as "The Wit Clinton" and thought he was an unfunny, egotistical relative of Hilary Clinton, and every time he tried to do a speech, the crowd thought he was a stand-up act and heckled him off stage after 20 seconds about Foreign Policy. 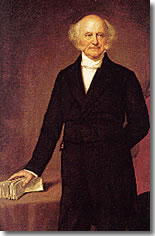 The over 50's were happy at the prospect of higher wages

1. "Foreign policy is perhaps the most vital thing in this country right now, and you the voters need to-hey! Who threw that?! Was it you, large breasted women in the front row? I'm coming for you, you better watch your back you filthy whore! Is that your husband? He's like a hairy shit in a jacket! Just like you. LOL!"

James Monroe had an epic battle plan which was to create his own country, Liberia, and then make them all eligible to vote for him in exchange for free beer. Genius!

Some of Clinton's ads bordered on offensive.

The most valuable thing that a politician can have in a campaign is a could staff who can come up with good insults for the candidate to fire off whenever his opponent does something he doesn't like. Due to the lack of technology such as mobile phones, television and radios, 1800's attack ads had to be easier to distribute, using things such as speeches, paper and the sky.

“Mr. Clinton shows speech patterns consistent with those of individuals who are known to enjoy juggling octopi while listening to classical records at half speed.”

“Vote for Monroe. Unlike some candidates, he doesn't rape children in a dungeon underneath his house.”

“Every time he opens his mouth, a child dies somewhere.”

“Yo mama's so fat that Big Bang was her fart”

~ Clinton on his energy reform bill 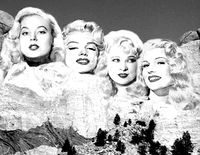 The course of the election day of United States presidential election, 1820 was quite dramatic, as Marilyn Monroe won the elections in the end. Her butler, James, was quite shocked by this surprising fact. Despite all his careful preparations, his backup plan, even disaster recovery plan and nightmare scenario coverage, Marilyn actually received most of the votes during these elections.

The outcome of these elections created jobs for thousands of sculptors, who had to make slight adjustments to the appearance of Mount Rushmore as Marilyn Monroe won. Their original mission was to add Marilyn to the sculptures that already existed, but then it was decided to let the people decide what Mount Rushmore should look like, and most people opted for four sculptures of Marilyn rather than the existing sculptures of George Washington, Thomas Jefferson, Theodore Roosevelt and Abraham Lincoln.

This democratic decision appeared to have positive effects on tourism. Mount Rushmore has been a tourist magnet ever since. Marilyn Monroe appeared to be far more popular than George Washington, Thomas Jefferson, Theodore Roosevelt and Abraham Lincoln combined. Of course, US history is not as important to most tourists as a famous female US president is.

A famous quote of Marilyn Monroe after the elections is: "The outcome of these elections does not really blow my skirts up!" Clearly, Marilyn was already convinced that she would win the elections beforehand.

Time Table of the Election Day[edit]

The outcome of the United States presidential election, 1820 was subject to much criticism, esp. from the Unorganized Territories and the states west of it. In general, the Tibetan Lobby was blamed that it had far too much influence on these elections. The Dalai Lama of that time denied all involvement in US internal affairs, stressing that the country strictly adhered to the Monroe doctrine which was once formulated by Marilyn Monroe but was falsely attributed to her butler, James.

The unorganized territories in the south-east, which would later be known as Florida, were quite happy with the outcome of the elections. Part of the deal was, that these territories would get a subtropic climate in return and become the sole peninsular state of the US, which has been the case ever since.

The Canadians, who supervised the US elections of 1820, were blamed for being partial. A popular slogan in those days was "Blame Canada!"