From Uncyclopedia, the content-free encyclopedia
Jump to navigation Jump to search
The Whole Universe ...The Musical!

The Universe: The Musical was a musical developed by two leading scientists, Carl Sagan and Stephen Hawking. It is almost exactly 2 hours and 44 minutes long, and spans the history of the evolution of the universe and the evolution of life on Earth, each minute representing 83,333,333 million years. Broken up into 3 acts, it has been said to be the most schizophrenic piece of crap that was ever put on Broadway.

Soon after its Broadway career, it went off-Broadway, then off-off-Broadway, and is now showing at the Fresno Funtime Children's Theater. Being true to the universe, the script calls for one singer per star in the universe, which accounts for the massive budget the musical calls for.

Did you know... The play calls for 4x1022 actors. At the usual wage for an actor the budget usually exceeds 500 dollars in America, or 8 pounds in England. 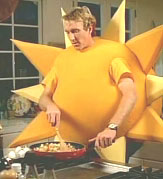 Unfortunately, the first act is the slowest of all three acts, and covers merely the creation of the universe by [INSERT THE NAME OF YOUR FAVORITE INVISIBLE CLOUD-DWELLING SUPERHERO HERE]. The first scene describes the big bang followed very very closely by the creation of the strong and weak forces, protons, neutrons, and electrons. The person playing the universe is traditionally inside of a very hot, very fat suit during the first act. At the very beginning, actors shoot roman candles into the audience to simulate the big bang.

Universe: OOOOOOOhhhhhh, I am the universe, here to stay,

Universe: Nobody should get in my way,

chorus: Nobody should get in its way,

Universe: Because I am quite large,

chorus: Yes, it is quite large,

Universe: And hot (in a sexual way)

chorus: Yes, it gives a good lay. Wait, what?

For the rest of the hour, the actor playing the universe has his fat suit filled and expanded to fill the auditorium to simulate the expansion of our own universe. While some critics applauded the audacity of it, most just left the theater.

Stars: OOOOOOOhhhhhh, I am a star, shining in the night,

Stars: It's about time, I think,

Boredom and sparkly things, we are the link,
We are driving the audience to the brink.
It is one of my darkest (and brightest?) fears,
That we should drive the audience to tears,
All while the director leers. 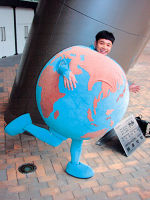 The second act also is excruciating for both the actors and the audience. Nothing eventful happens for the entire 54 minutes except that the actors silently and very slowly dance away from each other, and form clusters and mega clusters on stage.

The second scene involves the creation of the sun when the first act is nearly over (8 mins left) and the earth and the solar system a minute later. Because there are so many actors on stage, most audience members are confused until the spotlight focuses on the spiral arm of our galaxy.

Did you know... 300 billion actors are required to play the milky way in "The Universe: The Musical"?

For about the first 57 minutes of the last act of the play, the evolution of life on earth is covered. For the first 12 minutes, there is no life on the stage: All the actors play either rocks or volcanoes. An interesting scene is carried out where the actors throw rocks at each other simply for the amusement of the audience.

(Play time: 12 minutes left): After representing simple single-celled organisms, the actors start clinging together for greater protection against the elements, here represented by the sadistic stage crew, who throw various objects they find at the actors.

(Play time: 6 minutes left): The actors become fish. A short parody of "The Little Mermaid" is performed. A good time is had by all.

(Play time: 21/2 minutes left): The actors become mammals. The fleas they contracted while living an actor's lifestyle become useful in depicting the life of a typical dumb animal.

Dinosaurs ruled the earth from 200 million years ago to 65 million years ago, which means that, in the play, the entire history and evolution of dinosaurs is covered in almost exactly one minute and 37 seconds.

chorus: Whaaaaaat is it?

Dinosaur: We should probably get in the car!

chorus: Wheeeeere did you park it?

What do you mean the best we could do is a dog in a pimp costume?

The entire course of human evolution, and the entire history of mankind is covered in the last 2.16 seconds of the play. The play covers a few key scenes in the history of humanity, such as the parting of the Red Sea, the rise of the Iron Curtain, and Paris Hilton's indictment. The play abruptly ends after depicting the 2000 election.

The musical is kept in trust with scientists all over the world, who have to add another minute to the play every 83 million years.

The play's epilogue represents the remaining time of the universe as constructed by Sagan and Hawking from the present day to the heat death in 10120 years. Because each minute represents 83,300,000 years, the play continues unabated for 3.8x10105 years!

By the end of the play, most of the actors have quit, died, decomposed, and become minerals in our drinking water. Most of them went on to become investment bankers and soulless accountants. 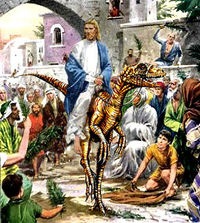 Pardon me, but this is historically accurate.

As a response to The Universe, a group of creation scientists made "Creation: the Musical" a competing musical (as though musicals compete with each other) which follows the creation of the universe 6,000 years ago to today. Critics have noted that it has exactly the same plot as "The Universe: the Musical" squished into a 6 thousand year timeline. In this musical, which is also 3 hours long, each minute represents a paltry 33 years. Some critics lauded the audacity of making each minute only represent 33 years, but most of the others had already left the theater. The play is used to teach children that evolution is a myth, and that the world is only 6 thousand years old as opposed to 13.7 billion. The play covers the years 4000 BC to 2000 AD.

God creates the Universe in about 4,000 BC, and the first galaxies form 175 years later. The 1000 actors representing all the stars in the universe are required to wear robes onstage, and sing directly from scriptures. This made for a particularly horrible play.

God created the sun in about 409 BC, the height of the Roman Republic. Half the actors are playing stars at this point, and the other half are playing Biblical figures such as St. Aquinas and, uh, Ralph.

Did you know... the first plants on land appear in 1792, the same year the post office was invented? It's fuckin' true!

The first lifeform on Earth appears in 248, two centuries after Jesus was crucified. The actor playing Jesus is a rock, and the Romans are represented by volcanoes.

The first simple animal on Earth appears in 1737, about 40 years before the declaration of independence is signed. The actors, dressed up as jellyfish, fight the American revolution.

The first mammals appear in 1912. The actors, dressed up as things that look vaguely like dogs, fight the first world war. By the time of the Great Depression, 1934, birds arrive on the scene. In 1943, the first flowers appear, just in time to cover the graves of those proud soldiers in WW2.

The dinosaurs appear in 1891 and die out in 1972. An actor in a dinosaur costume playing Nixon gets hit in the head with a comet. By this time, the actors are sending out their resumes.

The first human arrives on the scene in 1999. A man in a hairy ape costume representing Al Gore debates George Bush. By this time, the actors have quit acting altogether. The epilogue of the play describes the second coming of Christ, scheduled for 2109.

Next year will see the release of Intelligent Design: The Musical, an alternate version of the plot of The Universe. The cast will be sharply limited: one actor will do everything.

Featured Article  (read another featured article)
Featured version: 2 September 2008
This article has been featured on the front page. — You can nominate your favourite articles at Uncyclopedia:VFH.