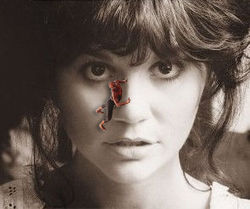 Why individuals would want to climb Linda Ronstadt in the first place remains a subject of much heated debate.

Sometimes even the most saintly of Uncyclopedia editors become involved in disputes over content. These may become heated, and sometimes degenerate into incivility or even revert wars. Edit wars traditionally result in an article's being protected on the wrong version by a passing administrator.

In extreme cases where the issues are of paramount importance, editors may be tempted to climb the 70's singing sensation Linda Ronstadt dressed as Spider-Man in order to promote their cause. This is strongly discouraged and will result in a definite block from editing Uncyclopedia. Until the stars burn cold.

This decree is intended to stop content disputes from escalating to the extent of scaling Linda Ronstadt dressed as popular comic book characters. Note that climbing Linda, or indeed any folk rock/country singers dressed as Spider-Man is an absolute limit – not an entitlement! Users scaling any singer-songwriter dressed as any popular comic book character may be blocked for disrupting Uncyclopedia to make a really stupid point. Even threatening to do so is generally viewed as unacceptable. And probably a little bit strange.

For those without comedic tastes, the so-called experts at Wikipedia have an article about Uncyclopedia:No Climbing Linda Ronstadt dressed as Spider-Man.

Editors who believe that another user is on the verge of climbing Linda Ronstadt dressed as Spider-Man may place a request at the Administrators Noticeboard (Ronstadt Climbing). Many administrators from the Rogue Admin Cabal will honour requests if asked (spammed on Talk pages at least 7 times), and will enforce blocks if warranted. Or unwarranted, we don't care too much actually. Maybe we'll just block people at random. That'll teach 'em!