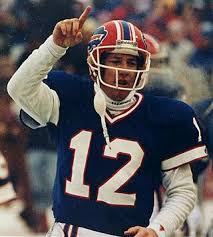 Here is the used to be great, Jim Kelly.

Buffalo, New York -- Legendary former Buffalo quarterback Jim Kelly has been diagnosed with cancer of the Bill, a form of the illness using found in ducks.

Kelly vowed to meet his cancer "head on" as he had "all the obstacles in his career," but ironically, experts believe it was his gung-ho to football which led to his contracting the disease.

"Kelly was famous for playing with minimal protection," says NFL head injury expert John McLaren. "He'd prefer to wear a punter-style helmet with one bar, his teammates had to force him to wear something a bit more protective, because he took so many hits to the jaw.

"Even in the last year or two of his career, you could see that Jim's jawline was starting to look more and more like a duck's."

McLaren showed UnNews evidence linking a number of NFL stars with curious jaw-related injuries. Last year, Miami Dolphins legend Dan Marino attempted to shoot himself in the jaw after a bout of depression caused by his inability to chew quietly.

However, Kelly himself has other ideas about how he contracted the illness. After speaking with Michael Douglas about how the Disclosure star got throat cancer, Kelly is convinced that carcinogens seeped into his jaw as he pleasured his lady wife orally.