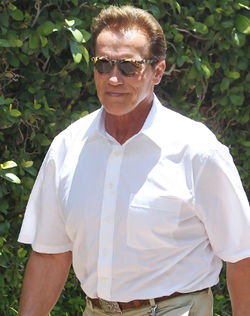 An elated Schwarzenegger shows his excitement after receiving the backing of the Greek god of thunder.

MOUNT OLYMPUS, Greece -- Zeus, the mighty Grecian god of thunder, lightning and extramarital affairs joined other deities Monday with his own endorsement for the Republican Presidential candidacy: Arnold Schwarzenegger.

Zeus’ backing of Schwarzenegger comes right on the heels of Jehovah, the Judeo-Christian god’s own muddled and ineffectual backings of Michele Bachmann, Rick Santorum, Rick Perry, Tim Pawlenty and virtually every other Republican office-seeker except Mike Huckabee.

“Though Zeus hasn’t been involved in earthly politics since his support of King Agamemnon during the Trojan War, his endorsement is nonetheless a massive boost to Schwarzenegger’s Presidential bid,” said a prominent Washington political analyst. “This, of course, is in stark contrast to Jehovah’s disastrous string of endorsements, which have done far more harm than good to the weak Republican field of candidates. Not only has Jehovah’s judgment been called into question, but the candidates themselves are beginning to lose credibility. People, for instance, are coming dangerously close to not taking Michele Bachmann seriously.”

“Speaking for all the Olympian gods now, I think it’s safe to say that we can all admire a man that goes around impregnating women that aren’t his wife,” said Zeus during Monday’s press conference. “I have a long, proud history of doing the same. It’s an action that really demonstrates more than anything else Schwarzenegger’s commitment to upholding the values of the gods of Mount Olympus.”

“Schwarzenegger’s the sort of mortal you want to have a bastard man-god child with,” said Hera. “I haven't felt that way about a non-Olympian since Jason in his pre-Argonaut days,” continued the goddess.

Several other Olympians offered their own glowing opinions of the Californian governor.

“I support Schwarzenegger because of his comprehensive foreign policy: kill everything,” said Olympian war god Ares. Poseidon, meanwhile, summed up his support of the governor by expressing his admiration of the 1987 film Predator.

Despite the positive appraisals of Zeus and other Olympian gods, several analysts were critical of the endorsement.

“Broad shoulders and extramarital misadventures aside, there’s no way Schwarzenegger is the Republican that most represents Olympian interests,” said another Washington analyst. “In terms of two arguably much more important characteristics—irrational hatred and willingness to make offerings to invisible beings in the sky—Rick Perry has Schwarzenegger roundly beat.”

Others criticized the move from a more pragmatic standpoint.

“Schwarzenegger’s and Zeus’ history as being both pro-gay and pro-homoerotic-male-on-male-semi-naked-wrestling is something that isn’t going to sit well with the majority of Republican voters,” said another anonymous analyst.

Criticisms aside, Schwarzenegger himself was optimistic about Zeus’ backing.

Regardless of Schwarzenegger’s optimism, he is roundly expected to have a difficult time campaigning not only against the slew of Republicans backed by Jehovah, but also against the Joseph Smith-backed Mitt Romney, the Ayn Rand-supported Ron Paul and, ultimately, Barack Obama, who is endorsed by Islamic deity Allah, the Judeo-Christian Prince of Evil, Lucifer, and whatever life-force world-spirit thingy those New Agers believe in.