UnNews:XFL to launch franchises in pissed off markets 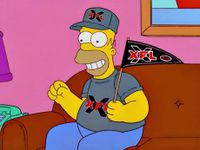 American football league XFL is set to follow up the success of bringing football back to St. Louis by introducing new teams in every town and city the NFL has managed to piss off.

While most of the XFL teams play in cities which also host NFL teams, the St. Louis BattleHawks occupy the stadium recently vacated by the Los Angeles Rams. Such has been the success of the franchise, that XFL CEO Vince McMahon has announced that next season several new familiar-sounding teams will be launched:

The teams were initially set to be paired with former WWE wrestlers and have appropriate nicknames, but this idea was later canned, so the Oakland Undertakers, the Houston Ultimate Warriors and the San Francisco Rock never came to light. Instead, McMahon employed a number of pun experts to name the teams as closely as possible to their current/former NFL counterparts.

McMahon denied the teams were just lazily cashing in on existing interest in NFL: "Just to prove you guys wrong - we are gonna rename the New York team New Jersey Dirty Tunnelers."