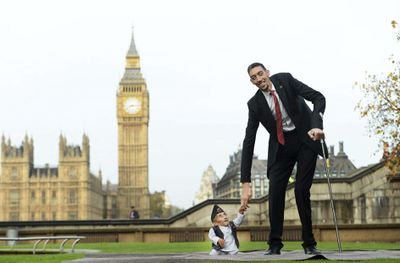 The newly married couple, after their wedding in Westminster Abbey.

At a function to celebrate the 60th anniversary of the Guinness Book of Records, the world's tallest and smallest man have announced they are going to get married.

Kosen, who works in Istanbul as a lamp-post, stooped down to shake hands with 74-year-old Dangi opposite the Houses of Parliament in London - and the chemistry between the two was palpable immediately.

Kosen added: "Even though he is short and I am tall, we have had similar struggles throughout our lives and when I looked into Chandra's eyes I knew he was a good man - and a volatile lover."

Meanwhile Dangi has vowed to leave his job as a poledancer in Nepal to live with Kosen in Turkey in holy matrimony. "When I first saw him, I had this irrational fear that he was going to punt me across the river, but I now see the tenderness inside him, and I want to spend every waking day of my life making love to him."