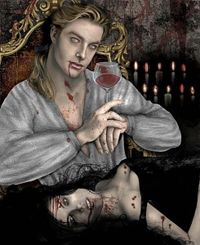 Some ancient writings claim that a distinguishing trait of vampires is exuberant homoeroticism.

Vampire hunter Helsing van Belmont is continuing his quest to rid New London of vampires, but admits that problems with his library of ancient writings is a setback that will make it challenging to achieve his goal of eradicating the vampire population by 3270.

"I've been poring over ancient literature from the 20th and 21st centuries," says Belmont, "and, frankly, it's a jumbled mess."

The literature has a massive discrepancy on the relative strengths and weaknesses of vampires. While some sources portray vampires as nearly invulnerable beings of immeasurable power, others describe them as feeble creatures who will explode into a cloud of dust upon being poked with a pencil by a teenage girl.

Still other sources assert that vampires are creatures interested in very little other than fucking each other.

"It's maddening," says Belmont. "Do they fear crosses? Can they turn into bats? Can they assume gaseous form? Are they best defeated with a chain-link whip? Can they cross running water? There are no consistent answers! Nothing seems to add up!"

And some of the accounts of vampires are downright bizarre.

"One of my ancient sources claims that vampires exist for the sole purpose of helping children learn how to count," a confused Belmont reports. "That just can't be right. What, do they present a list of integers to children in exchange for a small quantity of blood? Most of my sources don't mention vampires in a scholastic context at all."

Adding to the confusion, Belmont has uncovered sources claiming that a vampire's primary function is to add chocolate to cereal. This has led Belmont to speculate that there may be at least two sub-species of vampires: one that preys on the flesh of mortal humans and one that educates and malnourishes children.

Based on this slew of contradictory information, Belmont has formulated several contingency plans to deal with vampires. The first of these plans involves dressing entirely in leather, obtaining a bullwhip and a motorcycle, and riding into a nest of vampires.

"Vampire hunters seem to do better when clad in leather," explains Belmont. "I'm not sure why."

Another of Belmont's plans is to find an angsty teenage girl, nag her about the need to spend more time on her training, insist that she attack him, and then, when she beats him up, remark in a droll British accent that that's enough training for today.

"It seems to be an effective ritual in some of the literature," Belmont elaborates. "I'm not sure why."

If none of the above succeed, Belmont's final plan is to unleash a plague of werewolves upon New London.

"Some of my sources suggest that vampires and werewolves are mortal enemies likely to wipe each other out," Belmont says. "I'm not sure why."

Featured Article  (read another featured article)
Featured version: 22 March 2009
This article has been featured on the front page. — You can nominate your favourite articles at Uncyclopedia:VFH.