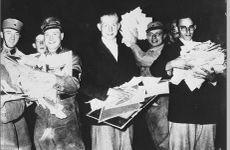 A photo published in Pastor Terry Jones's 2009 newsletter. 'Thanks to everyone for bringing along copies of Barack Hussein Obama's book The Audacity of Hope: Thoughts on Reclaiming the American Dream. They sure burnt good!

Gainesville, Florida, USA -- In a world exclusive, UnNews has obtained a copy of Pastor Terry Jones's email to his local church congregation about the planned Koran book burning festival. This is to be held in Gainesville, Florida on the 9th anniversary of the terrorist attack on the USA in 2001. The email reads:-

Howdy Christian Brothers and Sisters, hallelujah! I hope everyone can come to this year's Koran Book Burning Festival on Saturday, September 11th in memory for all those patriots who died when liberal-inspired Muslims declared war against our country in 2001.

Now that I have got the world's attention, I will urge everyone to bring a copy of this so-called 'holy book' (also available at a special fire sale price of $1.99 from the stall next to the church, thanks Ayn) to the large bonfire that we are currently building out front. I am told that our edition of the Koran will burn very well as it as been mass produced on poor quality paper (a big thanks to everyone down at Sawney Bean Paper Mills) and will crackle like bacon on a barbecue! That last detail I really like by the way.

Outsiders are calling us bigots, racists, loonies and other words I don't understand but remember, this abuse comes from the godless media in New York and Europe or are broadcast by the Al-Jihadi TV network in Dubai (thanks Bristol for the Conservapedia fact check). Now I know there is only one True Book and that is the Conservative Bible as translated by Professor Schlafly and it says there that 'He Who Throws The Koran Into The fire, Will Be Blessed By God' (according to the last page edit, thank you Andy).. So that's fine with me.

Everyone is welcome except muslims, atheists, liberals, over wordy people...well you know who I mean. Afterwards we will be holding a prize draw with the winner receiving signed copies of Glenn Beck's latest book Just Send Me the Money which I can heartily recommend.

Godspeed and let's pray it isn't a rainy day! Oh, and don't forget the marshmallows.

Pastor Terry Jones (No. Not that British Liberal from the Monty Python television series). tjones@godspeed.foxpalin.com

Pastor Terry Jones will be dressed up for the event.

When UnNews contacted Terry Jones for his comments, he surprised us by answering in a Welsh accent and suggested that we had dialled the wrong number. So if the real Pastor Jones can contact us, please send a message via the usual channels.